These memory kits will be available in 2x8GB configurations using "highly-praised Hynix D die" memory chips, which can reliably run at 4400MHz on Intel's Z490 and AMD's X570 motherboard platforms on modern Comet Lake and Ryzen 3rd Generation desktop processors. With RGB 2.0 support, users of these memory kits can also control the LED lighting of these DIMMs on the fly.

These Aorus memory kits are designed to operate with 4400 MHz speeds and 19-26-26-46 timings. At this time, it is unknown if Gigabyte plans to offer these kits with optional non-functional "DUMMY DIMMS" to fill the extra DRAM slots on Z490 and X570 motherboards.

Gigabyte's new Aorus memory design is made from anodized aluminium with chamfered edges, allowing these kits to be installed with no risk of scratching cutting users. With these modules, Gigabyte plans to offer users a lifetime warranty, promising a worry-free user experience.
At this time, Gigabyte has not revealed the pricing of their 4400MHz Aorus memory modules, though you can expect them to come at a premium price given their speeds and RGB functionality. Gigabyte expects these Aorus 4400MHz RGB memory modules to release before the end of Q2 2020. 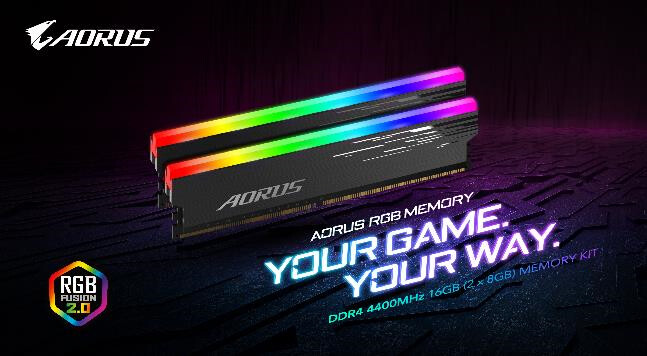 You can join the discussion on Gigabyte's Aorus 4400MHz RGB DDR4 memory modules on the OC3D Forums.