Get a boost up to 3733MHz on specific motherboards

Better still, when combined with selected Aorus motherboards (mostly Z390 and Z570), these DIMMs can be boosted to speeds as high as 3733MHz using your motherboard's BIOS. On Z390 this boost is to 3700MHz while on AMD platforms this speed boost is to 3733MHz.

In addition to the kit' standard 2x8GB RGB DIMMs, Aorus' RGB memory kits can ship with up to two DDR4 Demo kits, allowing users to create what looks like a 4-DIMM RGB configuration using two real RGB DIMMs and two, for lack of a better term, dummy DIMMs. This will allow your PC to look good while lacking the extra financial investment needed for four fully functional RGB DDR4 memory DIMMs.

Gigabyte advertises these memory DIMMs with 18-19-19-39 XMP timings at 3600MHz. Gigabyte did not disclose whether or not their AORUS BOOST mode had any impact on their memory's timings. 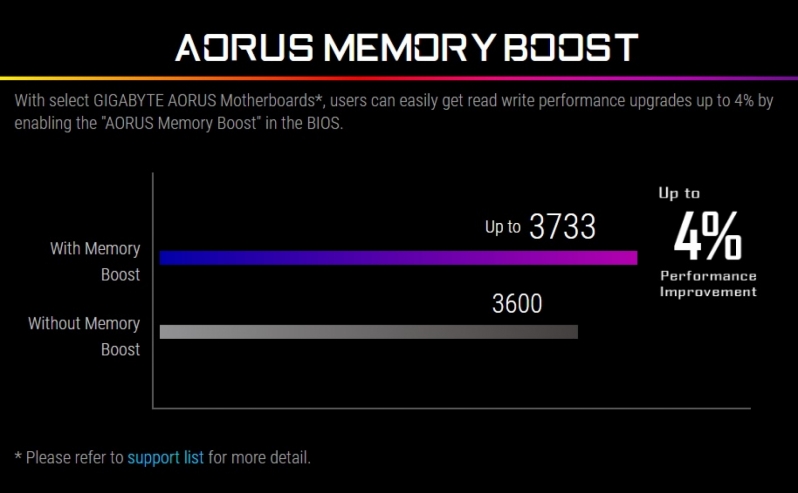 At this time, Gigabyte has not revealed the pricing of their 3600MHz Aorus memory modules, though you can expect them to come at a premium given their speeds and RGB functionality.

You can join the discussion on Gigabyte's Aorus 3600MHz RGB DDR4 memory modules on the OC3D Forums.

Bartacus
Wow, those are seriously sexy, and look fairly low profile to boot! I'd prefer much better timings though, now that I'm team Red for CPU.

I wouldn't even mind a non RGB verison to save money.Quote

m2geek
It's a shame that RGB-molested modules are so tall...

The corsair ones I have sitting in my draw are over 60mm tall LOL.Quote
Reply