Who says you can't have insane speeds and lightning-fast timings?

In an ideal world, PC builders would be using fast memory with the tightest timings possible, delivering on both the bandwidth and latency fronts. Memory performance relies on both factors, making optimal memory performance challenging to achieve in all workloads.

Some workloads demand insane amounts of bandwidth, while others benefit from low latency response rates. That is why G.Skill's latest Trident-Z and Trident-Z Royal memory kits target 4,000MHz speeds with lightning-fast CL-15 timings, offering the best of both worlds when it comes to latencies and raw performance levels.

Before now, the best the G.Skill offered at 4,000MHz was CL17 performance. Now, CL15 latencies are possible, significantly boosting the responsiveness of their latest high-end memory kits. Better still is the fact that G.Skill has rated this memory on both Intel's 9th Generation core platforms and AMD's Ryzen 3rd Generation platforms, results for which can be seen below.

At G.SKILL, we are always searching for the ultimate memory kit, tuned not only for speed, but also for efficiency. This means pushing for lower latency timings. Previously, the best CAS latency that memory kits at the DDR4-4000 level could achieve was at CL17. This is surpassed by the new DDR4-4000 CL15-16-16-36 32 GB (8 GB x4) memory kit running under 1.5 V, shown validated on the MSI MEG Z390 ACE motherboard and Intel Core i7-9700K processor in the screenshot below. 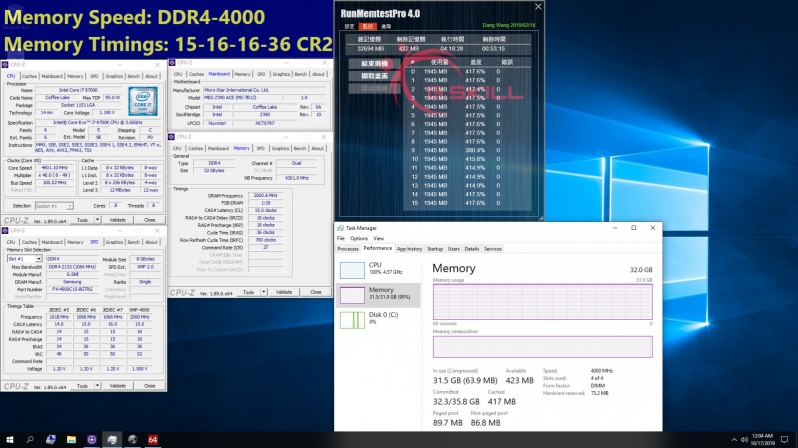 When it comes to memory, the ideal is the offer of incredible throughput (bandwidth) and ultra-fast response times. Memory performance can be limited by raw bandwidth, and by how fast memory responds to inputs. Now, G.Skill offers both highly responsive and ultra-high bandwidth memory modules within a single package.

A lower CAS latency typically means a bump in bandwidth performance, and this is no different on the latest AMD Ryzen platform. Normally, AMD Ryzen 9 3900X processor bandwidth with popular DDR4-3200 CL14 kit would fall around 50 GB/s for memory read bandwidth in AIDA64. With the new ultra-efficient DDR4-4000 CL15 memory kit, the memory read bandwidth breaks 61 GB/s in AIDA64 with a few additional tweaks, along with over 58 GB/s in memory write and 65 GB/s in memory copy bandwidth speed, as demonstrated in the following screenshot with the MSI X570 Unify motherboard and the AMD Ryzen 9 3900X processor.

You can join the discussion on G.Skill's Ultra-Low-Latency 4,000MHz DDR4 memory kits on the OC3D Forums.

NeverBackDown
I'm interested. Been rocking 2800mhz memory since ddr4 basically arrived and back then was considered higher end. Think it's time to upgrade.Quote

Bartacus
I'll be interested when the AGESA stuff will allow perfect plug and play operation. I have their 3600 CL15 kit, and XMP is funky at 3600 on the AMD side for my kit.Quote

AngryGoldfish
Quote:
So there's still issues with compatibility on the new motherboards/CPUs?Quote

AlienALX
Look closely at the bottom of that DIMM. They have been cutting corners