Up to 32GB of memory per DIMM

In the era of DDR4 consumer grade memory has been limited to 16GB per DIMM, limiting the potential of users who own motherboards with a limited number of DRAM slots or merely desire more memory than what 16GB DIMMs allow without venturing into the world of server-grade hardware.

As far as memory manufacturers go, G.Skill is a company that sits on the bleeding edge of development, pushing their memory to ever higher speeds while achieving the world's greatest memory overclocks with a level of consistency that borders on fanaticism.

G.Skill has been working with ASUS to solve the 16GB per DIMM limitation of today's DDR4 DRAM, developing a custom PCB solution that enables them to offer a 2x increase in capacity over traditional DDR4 DIMMs, fitting 32 memory ICs onto a single PCB to deliver 32GB of DRAM on a single DIMM.

Presenting G.Skill's Trident Z RGB DC memory DIMMs, double capacity DRAM kits that offer the same design aesthetic as other Trident Z memory kits while providing the same support for RGB illumination as their other RGB memory kits. Doubling down on DRAM capacity doesn't mean that you have to sacrifice on the aesthetics front. 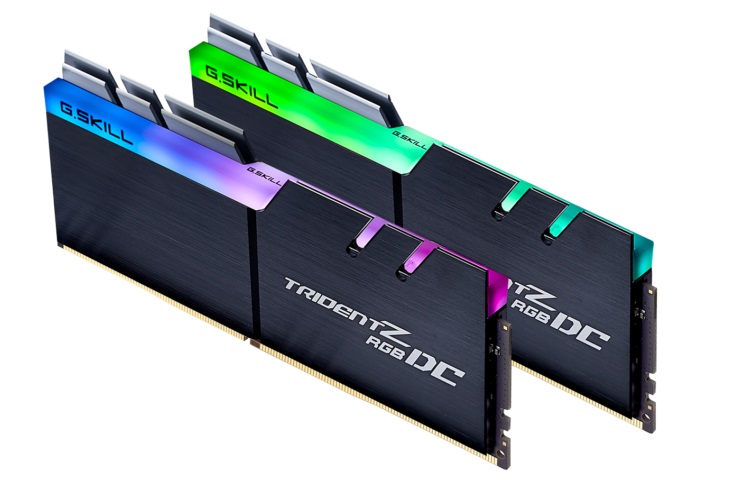 Right now, G.Skill's Trident Z RGB DC memory is only supported on three ASUS ROG series motherboards, all of which us INtel's latest Z390 chipset. These motherboards include the ROG Z390 Maximux XI APEX, the ROG Maximus XI Gene and the ROG Strix Z390-I Gaming, all of which are designed to offer two DDR4 DIMM slots. This will allow each of these motherboards to support 64GB of DRAM.

In terms of raw speed, G.Skill's double capacity Trident Z RGB memory kits are not record-breakers, but they offer to support either 3,000MHz and 3,200MHz speeds with low CL14 timings, which is more than enough for the average consumer.

At this time G.Skill has not revealed the pricing or release date of their new Double Capacity DDR4 memory modules.

You can join the discussion on G.Skill's double capacity Trident Z RGB DC memory modules on the OC3D Forums.