Corsair's Diminator Platinum memory is finally getting the RGB treatment

At CES 2019, Corsair has officially announced their upcoming Dominator Platinum RGB series of DDR4 memory kits, bringing their iconic series of ultra-premium memory into the world of addressable RGB lighting.

To create these modules, Corsair isn't just slapping some regular old RGB LEDs onto their Dominator DIMMs, that would be too easy. Instead, Corsair has decided to take things to the next level, not only by offering brighter Capellix LEDs but also by aiming for performance targets as high as 4800MHz out of the box.

What makes Corsair's new Capellix RGB LEDs so special is their size, luminosity and power, offering a 60% boost in brightness, a 40% lower power consumption and a 35% longer average lifespan, all while taking up less space (0.2 mm^2 vs 2.8mm^2). With these LEDs, Corsair's new Dominator Platinum RGB modules will be able to offer twelve individually addressable lights per module as well as full iCUE compatibility, enabling a lot of unique lighting options. Corsair's Dominator Platinum RGB memory will be the first Corsair product to use these new LEDs.

Much like Corsair's older Dominator series modules, Corsair's heat spreaders are made of die-cast aluminium, which are micro-arc oxidised to offer their unique colour scheme. Each memory kit will be created using hand-picked DDR4 memory chips, which are selected to provide the broadest possible compatibility and the best performance on both Intel and AMD platforms. 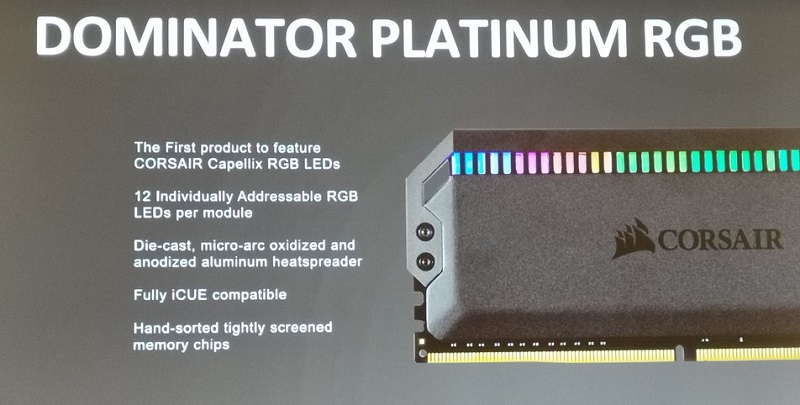 You can join the discussion on Corsair's ARGB Dominator Platinum series DDR4 memory on the OC3D Forums.

TheF34RChannel
Their design is so, so outdated it's not even worth joking about. Innovate, lazyQuote

Bartacus
Quote:
You just described almost everything Corsair has made in the past year or 2.