Last month, Intel shook the world with the announcement of their insane Xeon W-3175X processor, offering a total of 28 cores, 56 threads and support for up to 12 DDR4 memory DIMMs over six channels.

With Intel's mightly new Xeon comes a new CPU platform, shipping on the Intel's LGA3647 socket. Given the narrow use cases of this processor, only two motherboard manufacturers have decided to make overclocking-ready LGA3647 motherboards, one of which is ASUS' ROG Dominus Extreme. For this motherboard, Corsair has created a range of 6-channel DDR4 memory kits, ranging from 96GB to 192GB in size and from speeds of 2666MHz to 4000MHz.On the high-end, Corsair's 12 DIMM 192GB 4000MHz DDR4 memory kit costs $2,999.99, and its 96GB equivalent costs $1,499.99, staggering amounts of money for leading-edge memory bandwidth capabilities. All of these kits are tested and validated on ASUS' ROG Dominus Extreme motherboard.

Corsair's 6-channel memory kits have been released using the company's Vengeance LPX brand name, and at this time the company appears to have no plans to release Dominator Platinum versions of these memory kits for Intel's uber-high-end Xeon processor. 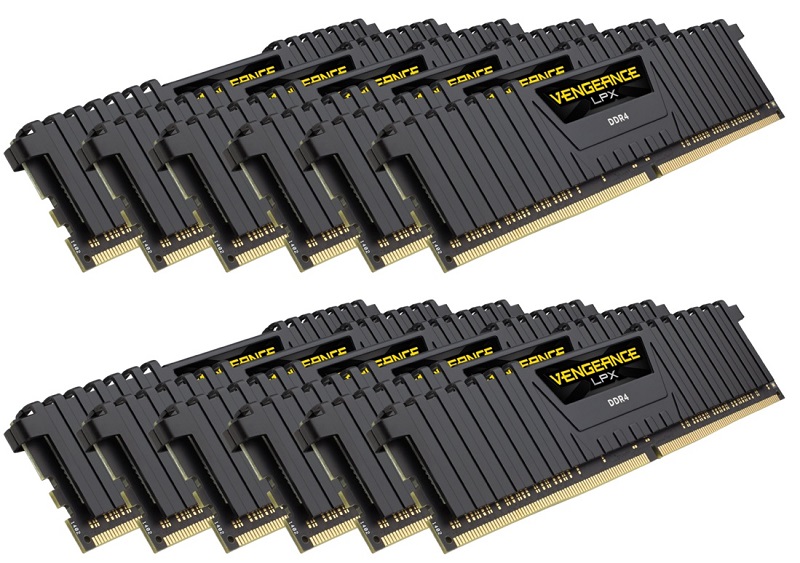 In terms of raw transfer rate, Corsair's latest offerings can deliver transfer rates that extend way beyond what is possible on Intel's X299 platform, with their high-end 4000MHz 6-channel memory kits offering read bandwidths as high as 122GB/s.

Dark NighT
Honestly i hardly see the point of this platform being on the consumer market.


All this will do is encourage more of this insanity, we don't need it in general, and the people willing to spend this much for this level of equipment would do so at a specialist anyway.Quote

WYP
Quote:
The point is because Intel wants to appear to be the best for as long as possible. 32-core Threadripper scared them, and this was their response. That's my thoughts on the matter.Quote

Dark NighT
Quote:
To which AMD could respond easily with Zen2 if they want to go all out and put a 48 core on the table, or even 64.


Regardless, it quickly comes down to silly levels, but competition even on this level is good i suppose.Quote

WYP
Quote:
Yeah, but that design is basically changing what would have been a 2-socket server layout into a 1 socket server. Useful for some use cases, but nothing revolutionary from Intel, especially when AMD has 64-core chips on the way.

Interesting product, but in my eyes its just Intel trying to hold out as long as possible until they can actually do something about AMD's core advantage. It will be very interesting to see how EPYC 2 impacts the server market.Quote
Reply