DDR5 memory will be the next major step over DDR4, offering users another boost in DRAM clock speeds which will be accompanied by reduced power consumption, increased storage densities and an overall boost in clock speeds.

Perhaps the biggest changes to DDR5 is its support for monolithic chip densities of over 16Gb, a change which will allow single DRAM modules to offer larger capacities than before, without the downsides of the die-stacking techniques that are required to deliver high capacity DDR4 DIMMs.

With DDR5, overall memory productivity has improved, allowing DDR5 DRAM to offer a performance increase over DDR4 without higher clock speeds, with 3200 MT/s DDR5 memory offering around 36% more real-world bandwidth than DDR4 modules at the same rate. DDR5 memory is designed to run at speeds of around 4800 MT/s, which when compared to 3200 MT/s DDR4 memory will offer a bandwidth increase of approximately 87%, which is a substantial generation-over-generation gain for DDR5.

Over its lifespan, DDR5 is expected to operate at speeds of 4266-6400 MT/s, though we can expect high-end DRAM producers like G.Skill and Corsair to push the envelope further with overclocking-grade modules. At this time the DDR5 standard has not been finalised by JEDEC, but Micron remains committed to starting DDR5 DRAM production in late 2019. 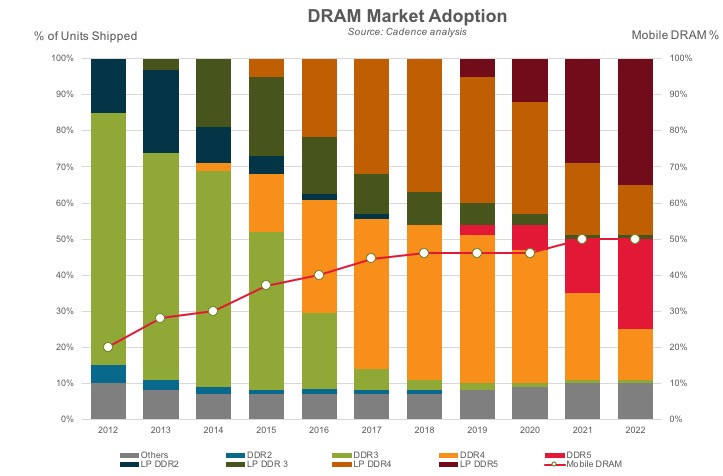 Cadence expects DDR5 memory to quickly supplant DDR4, predicting that LPDDR5 and DDR5 will supplant their DDR4-based counterparts in 2021 and 2022 respectively. At this time, mobile/LP DRAM is expected to have 50% market adoption, showcasing how mobile devices have transformed the DRAM market over the past decade.

You can join the discussion on Candice and Micron's update on DDR5 memory on the OC3D Forums.

Avet
DDR5, Zen 2, and mystic Ice Lake. Is it possible that in next 2-3 years we could see massive bump in performance?Quote
Reply