Originally only meant for showcasing, Avexir has combined powers with Casekings and OverclockersUK to create a beautiful new memory kit. This is the Avexir Sabranco Series memory kit.

The eagle eyed amongst you might've already noticed that this isn't the only 'Sabranco' product on the market. That is correct, as ASUS makes the Z97 Sabertooth Mark S Sabranco motherboard, and this isn't coincidence. The two match together perfectly. Our own TinyTomLogan has already checked the two together, and the results look rather nice.

This is what OCUK, the only retailer the memory can be bought at, has to say about the RAM:

"A product never meant for production as was just a showcase product by Avexir. But the combined powers of Overclockers UK and Caseking group means Avexir have agreed to produce this absolutely stunning memory kit for us. Of course this memory will work with any DDR3 mainboard but is a perfect match for the Asus Z97 Sabertooth Sabranco motherboard which we also sell.

This memory has incredible performance also being C11 and 2400MHz makes this one incredibly fast and highly efficient memory kit. Remember Avexir is an exclusive brand and ONLY available from OcUK and Caseking in Europe and we regard it as some of the very best memory on the market today with completely unique styling and the highest quality packaging on the market right now."

The kit also features some lovely LEDs, which make for some awesome aesthetics, especially at night time. The LEDs also have a pulse mode, in which one LED will light up after the other, to add that little bit of extra to your build. 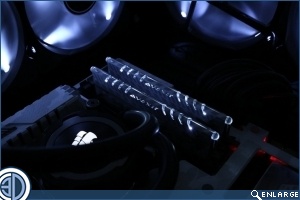 The Guvnor has also made a RushKit video on the kit (good lord that sounds weird), which you can watch below. It seems Avexir has created a beautiful kit of RAM, let's just hope it performs as well as it looks. Stay tuned for a (Video-)Review here on OC3D.

The Avexir Kit can be purchased on OverClockersUK. You can join the discussion on the Avexir Sabranco DDR3 Memory Kit on the OC3D Forums.

Warchild
Perfect for my Sabranco mobo then!

Too many new appealing products are being released in such a short time.Quote

Dicehunter
Love Avexirs stuff, Got the Blitz 1.1 stuff with white breathing LED's in my main rig and Avexir Core White Series in my HTPC/Server.Quote

Excalabur50
What awesome looking ram, love how things are getting more customizableQuote

JLR
Awesome looking stuff, Looks great with the Sabranco board. I think the black sticks with the red LED'S also look very nice and would look good on an MSI Gaming board.Quote