Part of product development has always been about shattering limitations, especially in the world of technology. Why does this phone need button? Why do VR headsets need multiple cables? Why can't this graphics card do ray tracing? Why does Intel's Z390 platform need to be limited to a maximum of 64GB of DDR4 memory? Innovation comes when companies seek to move beyond the limitations of what came before.

ASUS has announced that they have updated their Intel Z390 series motherboards to support 32GB DDR4 memory DIMMs, enabling support for up to 128GB of memory over four DIMM slots. This will allow PC users to have 64GB of memory on board with two DIMM slots (mostly MITX designs) and up to 128GB of 4-DIMM mainboard designs.

BIOS updates that enable this support will be available for ASUS' entire Z390 lineup "soon", with Samsung being the first to offer JEDEC standard 32GB memory modules. 32GB memory DIMMs from other manufacturers will likely release over the coming quarters.

While most mainstream PC users will not require 128GB of DDR4 memory, this development will enable some niche use cases to be moved from HEDT platforms, such as Intel's X299 and AMD's X399, into smaller, more affordable hardware. It also enables the compact ITX form factor to support a staggering 64GB of memory, which was something that was only possible on larger Z390 mainboards before this update.

In short, ASUS is offering their Z390 users more options when it comes to DDR4 memory support, which is something that we cannot fault them for. 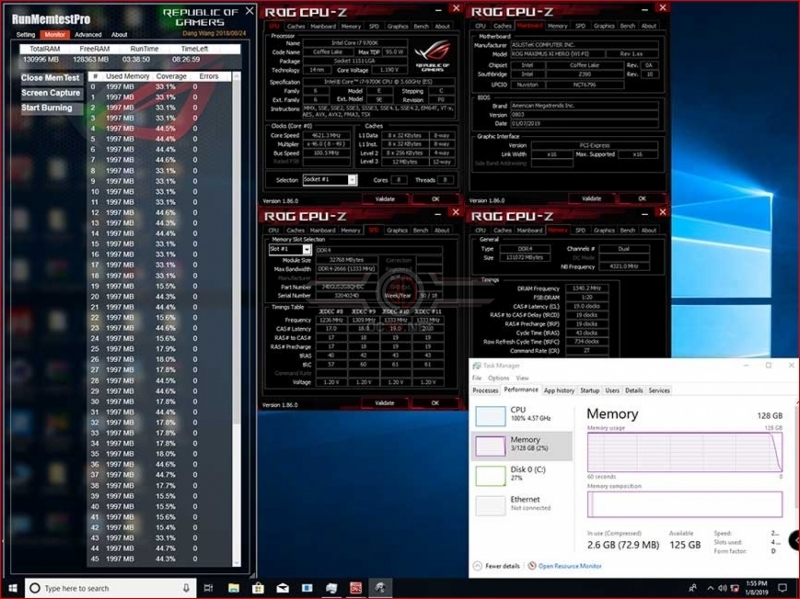 BIOS updates for ASUS' Z390 motherboards will be released in the near future and will be available on ASUS' website under each motherboard's support section. MSI enabled 32GB DDR4 DIMM support on their motherboards earlier this month (more info here).

You can join the discussion on ASUS expanding their Z390 support to enable 32GB DDR4 modules on the OC3D Forums.