The ALL controller has hit Kickstarter - A controller that works on all platforms?

Will this controller work as advertised?

The ALL controller has hit Kickstarter - A controller that works on all platforms?

As the name suggests the ALL controller is designed to function on ALL modern platforms, using an innovative software solution that will allow the controller to change profiles to suit whichever platform it is required to work with. This means that the All controller can be used on Android, PC, Mac, Xbox (One and 360) as well as the PS3 and PS4 consoles.
Today controllers can be exceptionally expensive, making it difficult for those that own multiple consoles to be ready for co-op/multiplayer play. This is what makes the ALL controller special, as it is a single device that can suit multiple platforms.

While the bulk of the software development of this controller is complete, it requires funding to bring this product to its manufacturing stages, bringing Digital Depth Inc to Kickstarter.

The company has already met their initial Kickstarter target of $75,000 CA, with the campaign having over 40 days of additional funding to go.

At the time of writing the ALL Controller does not support Nintendo platforms, though the company is working on Wii, Wii U and Switch connectivity. This functionality is expected when the device officially released, though unforeseen development challenged could get in the way. (Right now there are no aftermarket Nintendo Switch controllers on the market)

Due to the extremely limited budget that we were operating on we couldn’t confirm Nintendo device support for the launch of the Kickstarter. However we are currently testing Nintendo Switch, Wii U, and Wii connectivity. It’s very important for us to have the ALL Controller support these systems.

Wii: We are currently researching support for Wii connectivity. 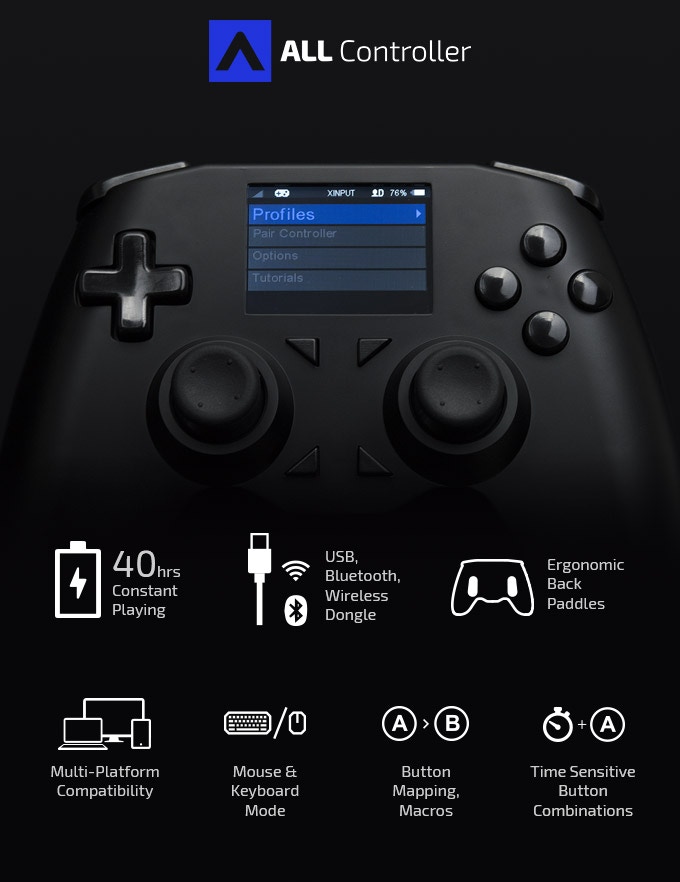 One other potential downside for this new controller is that it is not designed with an accelerometer or gyroscope, which could limit its functionality on certain platforms. These will be added if the controllers make over $1,000,000 CA on Kickstarter, but backers should not simply assume that this controller will hit this lofty target.

One neat addition to this controller is the addition of "Pro Paddles" on the rear of the controller, which can be useful for button remapping.

You can view the ALL Controller Kickstarter campaign here.

You can join the discussion on the ALL Controller on the OC3D Forums.