Nvidia's GTX 1650 graphics card is coming, bringing the Turing architecture to lower TDPs and price points than ever before. While Nvidia has not officially announced the graphics card, we know a great deal about its capabilities, especially so now that Zotac's GTX 1650 OC Edition has leaked onto the web.

This new leak, which comes courtesy of Videocardz, confirms our suspicions that Nvidia's GTX 1650 would utilise a 4GB frame buffer, a design decision that makes a lot of sense given how VRAM heavy modern games have become. There was a reason why they refreshed their GTX 1050 series with a 3GB model; simply put 2GB is no longer enough for many of today's gaming titles. 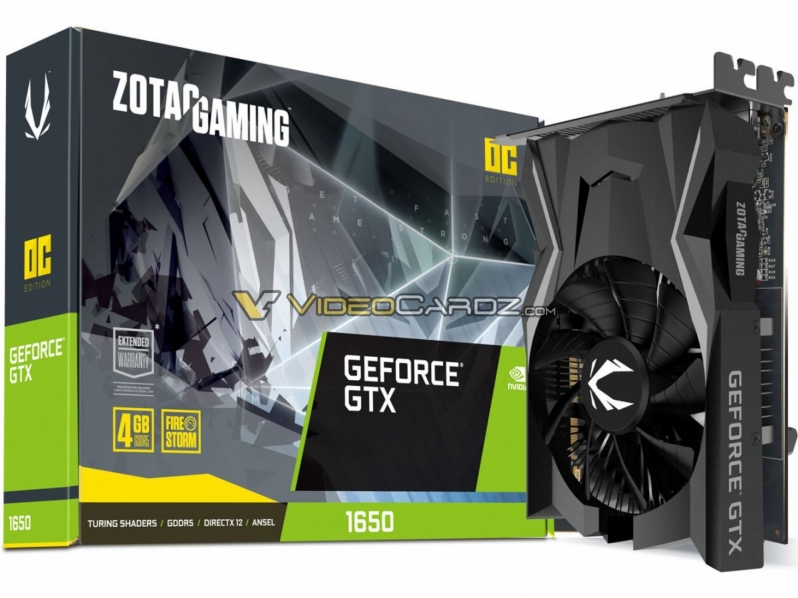 Nvidia's GTX 1650 is designed to replace the company's GTX 1050 Ti, offering gamers a low-cost entry point into PC gaming. Given the graphics card's low TDP, the GTX 1650 will be a great addition to many OEM systems, given its low power requirements and small size.

You can join the discussion on Zotac's GTX 1650 graphics card on the OC3D Forums.

tgrech
I know the 1050Ti and presumably this card are rated as having 75W "maximum" TDPs by NVidia but I feel at stock they can't be using that power target in none 6-pin variants while remaining within the PCIe spec. The PCIe spec only allows 66W @ 12V through the slot, while the remaining 9W is for 3.3v power, and so the GPU core (Which would get its power from the VRM which will take a 12V input for cleaner, stabler & higher efficiency power) would conventionally be limited to 66W. I'm sure every board could still pull 75W and most can probably go a lot further than that without issue and you could probably easily force the power target but I assume they must ship all the cards in spec? I guess technically they could burst upto 73W without breaking spec but does anyone know how this worked with the last cards?

(I know 9W doesn't sound like a lot but squeezing out 10% more on these little cards can have a noticeable difference to playability in some games, and these cards are perfect for cheap low bandwidth eGPU docks like the GDC EXP Beast, allows you to power it with a cheap portable 12V 7.5A laptop style adaptor)Quote


And according to Tom's hardware testing of the 1050 Ti, the card normally took 67W or less in games, when not overclocked, and I'd guess that the 1050 would be 63W or less.


Still, many cards did come with a 6 pin connector (like the one Tom's tested).Quote

tgrech
Oh I see apparently NVidia that non standard definition of TDP for simplicities sake. I'm pretty sure when Tom's hardware measure the power draw they'd only measure the 12V line so that makes more sense (And the 3.3V draw would probably be <0.5W since it's just for tiny controllers anyways). The 6-pin variants get pretty messy with these open air eGPU setups.Quote

ET3D
Tom's did measure the 3.3V line, which reached 1.5W. See here. That case comes with a 6 pin connector.