XFX has finally done it! They have brought back their slick, black and chrome cooler designs, something which we haven't seen from them since the R9 200 series. Don't expect a rainbow of RGB LEDs of a heavily angled "Gamer" aesthetic this time, as XFX is bringing us a design that offers the same look and feel of a 1950s sports car.

Meet the XFX RX 5700 XT THICC II, a 2.5-slot graphics card which ships with a custom cooler which features two 10cm axial fans and a heatsink with is both wider and longer than the graphics card's PCB. The graphics card also appears to feature a BIOS switch at the side of its PCB.

At this time the clock speeds offered by this graphics card are unknown, though they are undoubtedly higher than AMD's reference RX 5700 XT. 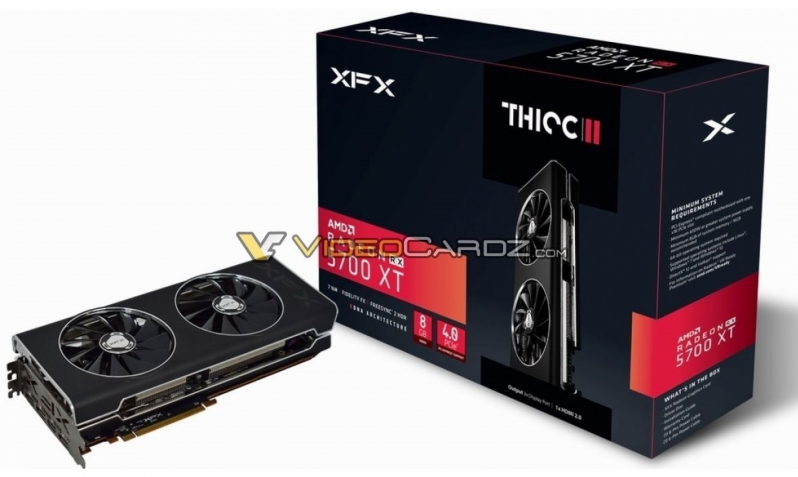 On the rear of the XFX RX 5700 XT THICC II, we can see that XFX has included a perforated backplate which features and XFX logo. While the logo is upside down in this picture, it is worth noting that the XFX logo will be correctly oriented when looking at the GPU from outside of your PC case, which is excellent news given the popularity of tempered glass case windows these days.

XFX's RX 5700 XT THICC II is expected to release within the next month, like other custom AMD Radeon RX 5700 XT offerings.

You can join the discussion on XFX's RX 5700 XT THICC II graphics card on the OC3D Forums.

Giggyolly
Finally a good looking card from XFX, glad they went this route!Quote

Dawelio
Looks like the 290 DD and 7970 GHz Edition that someone mentioned the other day...Quote

Kourgath223
Now this is a nice looking card so if Sapphire doesn't announce something soon this will more then likely be the card I go with to replace my dying R9 390. Hopefully this card releases next week, which I assume to be the initial release of the custom Navi cards.Quote

Wraith
Nicely done XFX I was always in love with the double discipation design of old.Quote
Reply