Is this XFX's best cooler design to date?

XFX has officially revealed their Radeon RX 5700 XT THICC II, a custom Navi graphics card which has a cooler which is 35% quieter and 90% larger than AMD's reference model. Combine this with XFX's four 6mm composite heatpipes, and XFX has a custom cooler design that will make AMD fanboys scream.

The RX 5700 XT THICC II comes with a design aesthetic that's akin to classic American automobiles, using chrome-like elements and a large grill to deliver what we consider to be one of the best looking Navi GPUs on the market.

Sadly, XFX's website doesn't currently list the specifications of the Radeon RX 5700 XT THICC II, instead using the specifications of AMD's reference Navi cards as a placeholder. Higher performance levels are expected from this card thanks to its higher-end cooling solution, and the tendency for aftermarket GPUs to ship with factory overclocks.

XFX lists in Radeon RX 5700 XT THICC with an August release date, which means that we can expect the card to hit retailers soon. 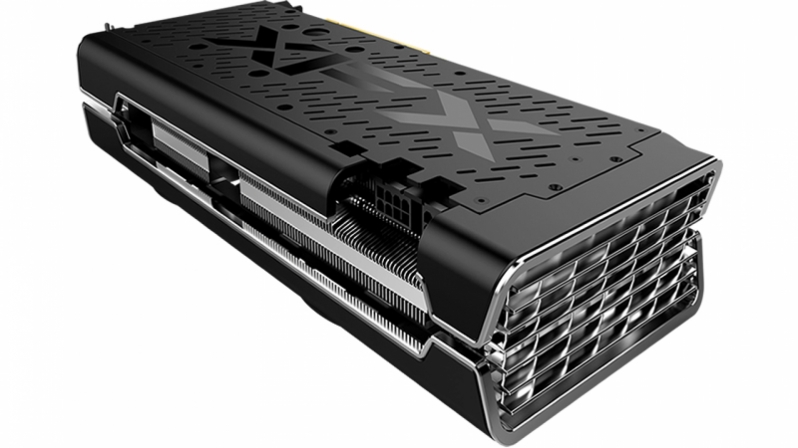 You can join the discussion on the XFX Radeon RX 5700 XT THICC II on the OC3D Forums.

Bartacus
Holy muscle car video card Batman! Gotta say, even though I am anti-air-cooling, I kinda like it. It's monochrome, has an interesting design with the two piece shroud, etc. I wonder how it performs.Quote

RobM
It is weird looking whilst being nice looking, certainly unusual.Quote

NeverBackDown
That has got to be 3+ slots wide.
Not sure I would want that tbh. Definitely going to sag.Quote