It looks like XFX is preparing their own version of AMD's R9 Fury GPU, meaning that XFX will soon be selling their own custom Fury powered GPU to go along with the current offerings from ASUS, Sapphire and Powercolor.

This model will be cooled by a 3 fan cooling solution and will be using a PCB which looks like AMD reference Fury X PCB. The cooler also looks very similar to Powercolor and Sapphire's designs, though XFX have gone for a more stealthy black cooler aesthetic. 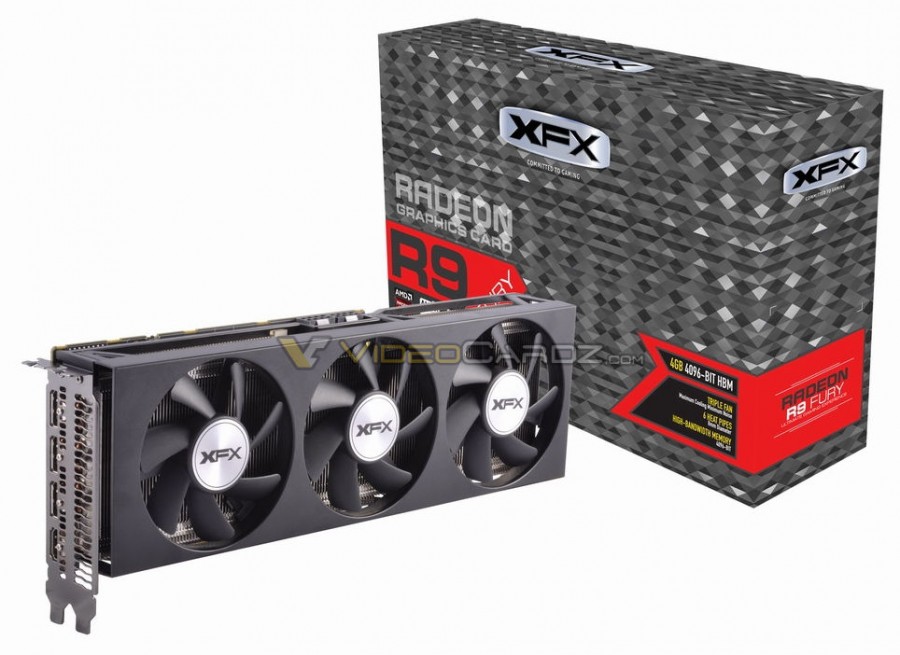 The GPU will be have specifications that are similar to other R9 Fury GPUs, with 4GB of HBM memory, 3584 GCN GPU cores and beefy 3 fan cooler design. This GPU will be powered by two 8-pin PCIe power cables and will have the rear side of the GPU covered by a  stealthy black backplate.

Right now we do not know what the GPU core will be clocked at on this GPU, though we would guess it will be somewhere between 1000 and 1040 MHz given the clocks of the GPUs that are already on the market.

Seeing an R9 Fury GPU coming form another manufacturer could be a sign that the low supply of AMD's Fiji GPUs may soon be over, but we cannot know for sure at this time.

You can join the discussion on XFX's R9 Fury GPU on the OC3D Forums.

It looks like XFX is preparing an R9 Fury GPU. Does this mean the Fury shortage is ending? http://t.co/x0GotDkgFo pic.twitter.com/eGhZPLdeve

xnax2802
Lovely sleek design. Wouldn't mind having one of those sitting in my rigQuote

barnsley
This could have been so much better looking. Not impressed with this. Where did the guy who designed the previous gen XFX cards go?

Agost
Looks like a bad copy of the Sapphire oneQuote

xnax2802
Quote:
Imo it looks like they fixed the Sapphire one, since that one is butt uglyQuote
Reply