What does AMD's Radeon RX 5700 series Base, Boost and Gaming clocks mean?

What is AMD's 'Game clock'

What does AMD's Navi Radeon RX 5700 series Base, Boost and Gaming clocks mean?

When AMD announced their Radeon RX 5700 series of Navi graphics cards, they revealed a new naming scheme for the GPU's clock speed variations. Before the release of Navi, AMD referred to their GPU clock speeds as Base and Boost clocks, but now AMD has added a new term to the equation "Gaming Clock", which aims to clarify what each word means when referring to new Radeon graphics cards.

AMD's base clock is what could be considered as their minimum GPU clock speeds, what each graphics card will aim for when under extreme "power virus" loads such as FurMark. Navi's clock speeds shouldn't ever get lower than this under load, assuming that your PC is well enough ventilated to prevent thermal buildup and throttling.

Navi's Boost clock is what the Radeon RX 5700 series targets opportunistically. In ideal scenarios, the Radeon RX 5700 will target this clock speed, but it won't be achievable under many workloads. With base and boost, Radeon has provided gamers with what could also be described as maximum and minimum clock speeds, which begs the question; what about an average?

This is where AMD's new "Gaming" clock speeds come into play. AMD has tested 25 games, which are a mix of unknown AAA and esports titles, and has used their performance data to calculate a clock speed which acts as a ballpark figure for what gamers should expect across most gaming titles. AMD has been a little conservative with their Gaming clock to ensure that most games will sit between their Gaming clock and boost clock speeds. 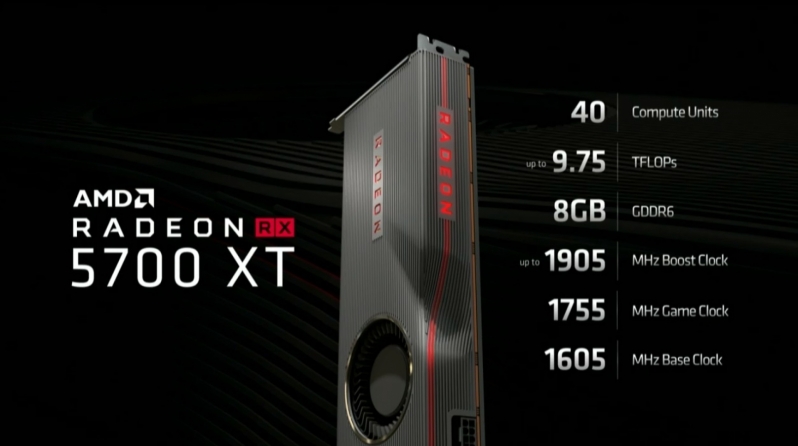 So that's the basics of AMD's new clock speed naming scheme for their upcoming Navi series of graphics cards. The base clock acts as an effective minimum clock speed for extreme (power virus) loading conditions while the boost acts as a maximum. Gamers can expect the vast majority of titles run somewhere between Navi's gaming and boost clocks, assuming their system is adequately cooled and powered.

You can join the discussion on Navi's RX 5700 series base, boost and gaming clock speeds on the OC3D Forums.

AngryGoldfish
I'm excited to see if these are decent overclockers or if they're already maxed out to stay competitive like almost every other card AMD has released in the last few years.Quote

Warchild
the values look quite rounded off. Perhaps it means there is headroom. With the exception of the game clock.Quote

WYP
Quote:
I'm curious what undervolting and power slider adjustments will do to that game clock. The base RX 5700 looks like an overclocking beast.Quote

NeverBackDown
It would depend on the binning I suppose for the base RX5700.Quote

Warchild
Quote:
Certainly does. My only concern right now is the cooler in use. I hope AMD learned from their Fury generation that cooling has to take a better priority than it has in the past.

Their blocks always looked like they didn't exhaust the air well enough. The fan itself looked fine but I do wonder how the fins will be underneath as air is forced through.Quote
Reply