Ubisoft has confirmed that Watch Dogs 2 will support DirectX 12 and that the game will feature optimisations for AMD GPUs. This marks a big change for Ubisoft, who typically integrate Nvidia GameWorks technologies into their games, like Assassin's Creed: Unity, The Division and Watch Dogs.

Ubisoft has not gone into any details on how the use of DirectX 12 will impact their future games, but the new API is expected to allow Ubisoft to better handle the large NPC counts like those seen in Assassin's Creed Unity and allow them to achieve much better in-game performance. 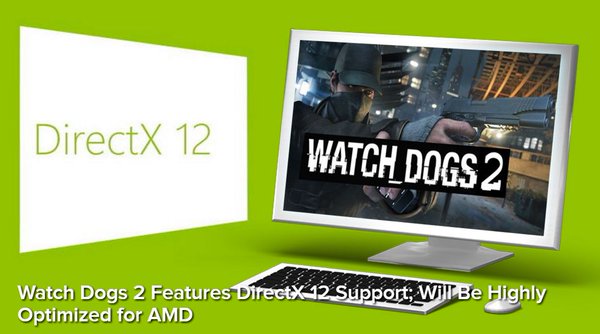 Watch Dogs 2 is expected to be revealed at E3 2016 though we hope that Ubisoft has made some significant changes from the original Watch Dogs if they want to provide anything more than forgettable experience.

Watch Dogs was a controversial game for many reasons, first, there was the fact that it received a visual downgrade when compared to its original reveal and second there was the fact that on PC is had significant performance issues on AMD hardware at launch. Hopefully, as Ubisoft moves into the future they will be making more of an effort on PC to create a game that performs well on a wide range of hardware, as many PC gamers are getting increasingly annoyed with the performance of some of their recent PC titles.

You can join the discussion on Watch Dogs 2 supporting DirectX 12 on the OC3D Forums.