An AMD Vega GPU has been pictured at CES 2017, confirming that the GPU has two HBM memory stacks and a die size of over 500mm² (around 520-540mm²).
This makes AMD's Vega 10 GPU similar in size to AMD's older R9 Fury X GPU, which was 596mm² in size and significantly larger than Polaris 10 which was 232mm² in size. We can see below that this GPU has two HBM2 memory stacks, which gives this GPU a maximum memory capacity of 16GB.
With two stacks of HBM2 memory, Vega 10 will have 512GB/s of memory bandwidth, which is larger than Nvidia's GDDR5X powered Titan X Pascal. 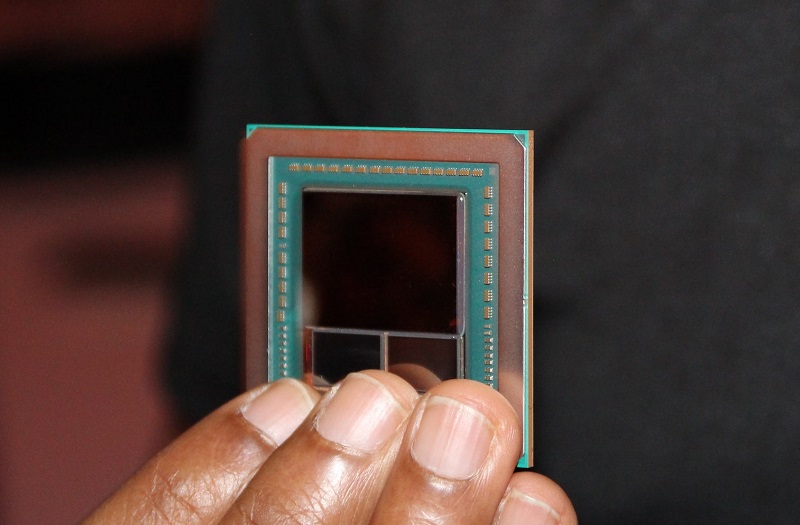 With AMD's recent Vega reveal they announced that Vega will feature increased GPU clock speeds when compared to Polaris and increased performance per clock, which should make this GPU significantly more powerful than any previous AMD GPU.

Right now we do not know when AMD plans on releasing Vega to the market, though we can almost be certain that it will come to market before the summer of 2017.

You can join the discussion on AMD's Vega 10 GPU on the OC3D Forums.

NeverBackDown
That thing is huge! Not the actual die, but the interposer.
I am now 100% confident I was right with 16GB Vega GPU as the top end modelQuote

Tripp
I find it really interesting, how both GPU companies are keeping there cards (pun intended) close to there chest. I mean Nvidia haven't spoke about or shown a 1080ti (we all know it's coming), and AMD have been keeping Vega very hush hush tooQuote

Xploited Titan
I'm positively thrilled by this. Might be my first red card ever! ^^

Greenback
Quote:
Got to wonder if the 1080ti is depending on how good Vega is and Nvidia are waiting to see when it's released what they need to do to have a top GPUQuote