It should be well known now that Nvidia's Titan V supports DXR (DirectX Raytracing), after all, it was the first graphics card to be shown making use of the API, with Nvidia using it to showcase their now famous Star Wars ray tracing demo.

Later in that same year, Nvidia launched their RTX series of graphics cards, an evolution over Turing with enhanced SMs, Tensor cores and a new hardware feature called RT cores, which Nvidia claimed would increase the ray tracing performance of their graphics cards significantly.

Today, we will see exactly what Nvidia's RT cores do, and how much of an impact they have over Nvidia's first ray tracing graphics hardware, all thanks to UL benchmark's new 3DMARK Port Royal utility. This tool focuses on ray tracing performance, which will allow us to see how much performance each graphics card truly offers in heavy DXR workloads.

The results below come from a member of the OC3D Forums called Kaapstad, who has access to both a Titan V and a Titan RTX, graphics cards which he has overclocked and tested under 3DMARK Port Royal to see the impact of Nvidia's RT cores on Ray Tracing performance. An important factor to note is that the Nvidia Titan V is currently more expensive than the Titan RTX. 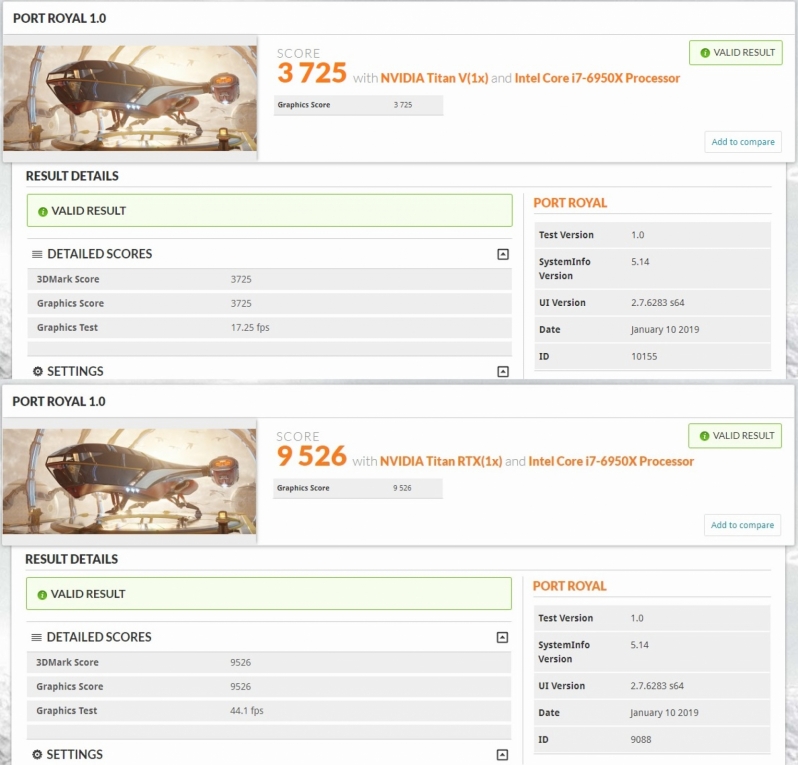 These results should put to bed the rumours that Nvidia's RT cores don't matter when it comes to ray tracing; they do, as otherwise, the Titan V would be able to compete with much higher-end RTX series graphics cards, rather than sit below an RTX 2060, even while overclocked.

DXR ray tracing requires custom hardware to complete the task, hardware which will no doubt evolve as newer generations of hardware are developed. AMD Radeon and Intel will both need to come up with their own solutions to ray tracing hardware computation, especially if either company plans to remain relevant, or in Intel's case become relevant, in the gaming market over the long term.

Special thanks to Kaapstad for allowing us to use his 3DMARK Port Royal benchmarks for this article.

You can join the discussion on the impact of RT cores on Nvidia's Ray Tracing Performance on the OC3D Forums.

TheF34RChannel
Wouldn't one just want to have a one week sleep over at Kaapstad and play games on his amazing stuff? Nice one dudeQuote

Eddie long
Kaapstad has all the toys

and putting them to good use , but as he himself admitted he is a hardware enthusiastQuote
Reply