ROG Strix, TUF and EVO. No AREZ in sight.

ASUS is preparing a lineup of Radeon RX 5700 series graphics cards, kitting out AMD's Navi cores with custom PCBs and enough cooling power to stretch the architecture beyond what's possible on the company's reference models.

Today, we now know that ASUS plans to release three RTX 5700 XT series graphics cards in August, starting with their ROG Strix series model, which will feature an RGB illuminated cooler, a triple fan design and the same Axial-tech fans that adorn the company's high-end RTX series models. Note that ASUS doesn't plan to use the AREZ name this generation, deciding to revert to ROG, a much better-known brand name. The ROG Strix RX 5700 XT is due to release on August 16th. This information comes directly from ASUS.

Next up, we have ASUS' TUF Gaming X3 RX 5700 XT, which also features three fans and what appears to be a 2.5-slot design. This model will sit below the ROG Strix RX 5700 XT, but should still offer plenty of cooling potential. The ASUS RX 5700 XT TUF Gaming X£ is due to release on August 23rd.

Finally, we have the dual-fan RX 5700 Dual EVO, the model below which features a dual-fan cooling solution. This model is due to release on August 30th. At this time the clock speeds of these graphics cards remain unknown. ASUS hasn't listed a full RX 5700 XT variant of this graphics card. 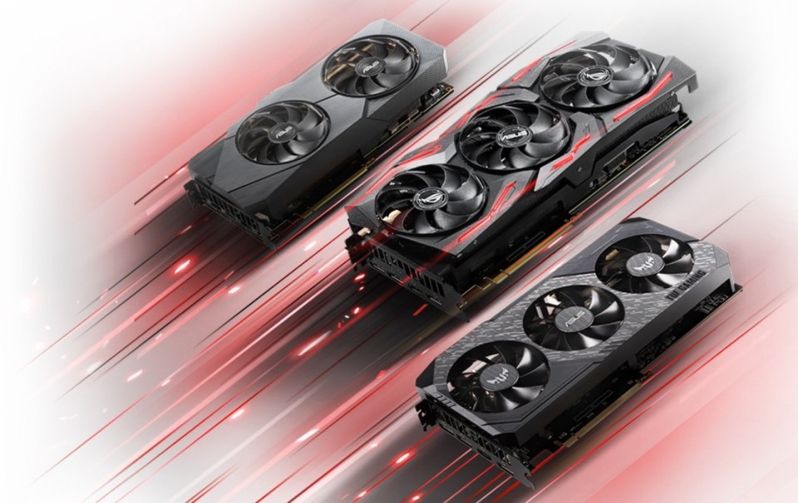 You can join the discussion on ASUS custom Radeon RX 5700 XT series graphics cards on the OC3D Forums.

AngryGoldfish
They look good. The Strix is a bit bland now, but the other two look good. Shame they'll be overpriced as per ASUS' usual self.Quote

Dawelio
Shame that they all look to be 2.5 slot and no standard 2 slot design.Quote
Reply