Update - We have confirmed that this £100 price increase has not been caused by retailers, as they have only been supplied with a limited amount of standalone RX Vega 64 "black" (Reference) products.
It seems that AMD's £449.99 MSRP was only intended to be for standalone GPUs for early adopters, with pricing increasing to £549 thereafter and ship with two free games as part of AMD's "Black Pack". These Games are Prey and Wolfenstein II: The New Colossus, which have a combined value of around £59.99.
This means that this "price" increase is not from retailers but was an intentional move from AMD, increasing the price of the RX Vega 64 by over 20%. This price increase is not from retailers or due to supply and demand, retailers were simply provided with a limited number of RX Vega 64 GPUs that could sell at AMD's original MSRP.
AMD's small allotment of RX Vega 64 standalone GPUs sold out within minutes, which means that AMD's RX Vega is unlikely to be seen as AMD's advertised MSRP anytime soon.
Original Article -
Price increases are common these days in the PC market, thanks to increased demand for GPUs due to mining and several other factors PC gamers are used to seeing products sell for well above their MSRP.
Today AMD's RX Vega 64 has officially launched, and already we have seen retailers increase the prices of AMD's reference increase to values that are well above the GPU's official retail prices. These increases are from AMD's original MSRP of £449.99 all the way up to £548.99, an increase of £99. This is a price increase of over 20% for upcoming Radeon RX Vega pre-orders.
These price increases can be seen at multiple retailers today, not even two hours after the GPU became available at retail, with stores reporting that stocks of several hundred RX Vega 64 GPUs have sold in mere minutes of pre-orders going live. 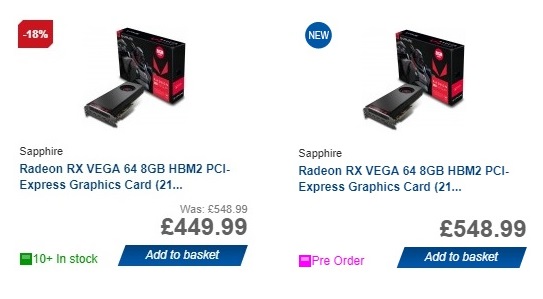 In this case, retailers are just responding to the sheer demand for RX Vega GPUs, leaving us to question why AMD was unable to supply retailers with more stock at launch. At this time the pricing of AMD's Limited Edition RX Vega 64 Air and Liquid GPUs have not been increased.

This is a situation that will need to be monitored over a longer period of time, as stock levels could go back to normal within a short period of time as more stock appears at retail.

Update - These new "price increased" RX Vega GPUs are now listed with two free games, Wolfenstein: The New Colossus and Prey, adding £59.99 worth of free games to the GPU.

You can join the discussion on AMD's RX Vega 64 on the OC3D Forums.

Bartacus
And just by coincidence, I saw the first 1080TI drop under $800CDN on sale today. Go figure.Quote

RickPlaysWarr
I can't really blame the vendors. Its basic economics when something is in short supply. I personally won't buy at the inflated prices so have to wait if I intend to try vega. It would probably only go in my daughters rig to replace her RX480 card.

WYP
Quote:
Yeah, it is simply the laws of economics at work here. Just a shame that there isn't enough RX Vega GPUs to go around.Quote