SK Hynix has shown HBM, GDDR5 and HBM 2 side by side at Nvidia's GPU Technology Conference, showing that HBM offers huge capacities for its size when compared to both older memory standards.

These size reductions are hugely impressive, especially given the fact that HBM also offers greater memory performance while also consuming less power, making it the superior memory standard in pretty much every way. 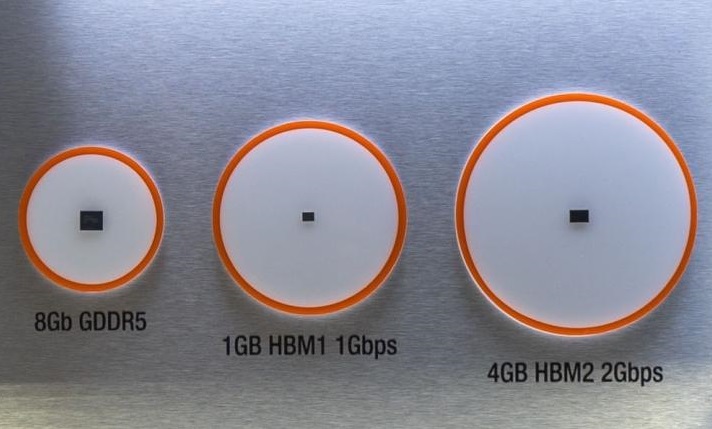 When considering the fact that the AMD R9 Fury X had a total of 4GB of HBM memory it is amazing to consider that SK Hynix has managed to fit this kind of capacity into a single chip of HBM 2.0, leading the way to GPUs that have 16GB of VRAM in the future.

Samsung has already stated that they will be producing 8GB HBM 2.0 chips sometime this summer, doubling the capacity of the SK Hynix HBM 2.0 memory shown here. HBM 2.0 not only offers huge capacity gains for the HBM memory standard but also offer around 2x the memory bandwidth, making this new memory type very attractive to GPU manufacturers.

Sadly, we do not know when GPUs using HBM 2.0 will be coming to consumers, as right now the first HBM 2 powered GPU, the Nvidia Tesla P100, is currently set to be available to OEMs in Q1 of 2017.

You can join the discussion on HBM 2.0's amazing size to capacity ratio on the OC3D Forums.

SK Hynix has shown HBM, GDDR5 and HBM 2 side by side at Nvidia's GPU Technology Conference.https://t.co/R0LqRlvViv pic.twitter.com/wCChnkj8em

NeverBackDown
I'd say hbm1 for phones is doable at that size, considering ddr4 is already in phones. Consume less power and since smaller, probably lighter. Speed won't make much of a difference though. Other two factors I mentioned would be worth it for premium phones. Maybe even tablets tooQuote
Reply