Hot on the heels of Nintendo, Sega has announced a Mega Drive Mini Console with 80 built-in games, wireless controllers, and compatibility with original Sega Mega Drive cartridges from all regions, including PAL and NTSC.

Unlike the Nintendo Mini NES the SEGA Classic Mega Drive will come with two controllers, allowing players to play multiplayer games without needing to buy an additional controller.

This new Mini Classis console will cost £49.99 in the UK and is listed by Smyths UK to release in October. This specific Mega Drive version has been created to celebrate the 25th anniversary of the Sonic the Hedgehog franchise and will contain several classic Sonic games as well as Mortal Kombat 1, 2 and 3. 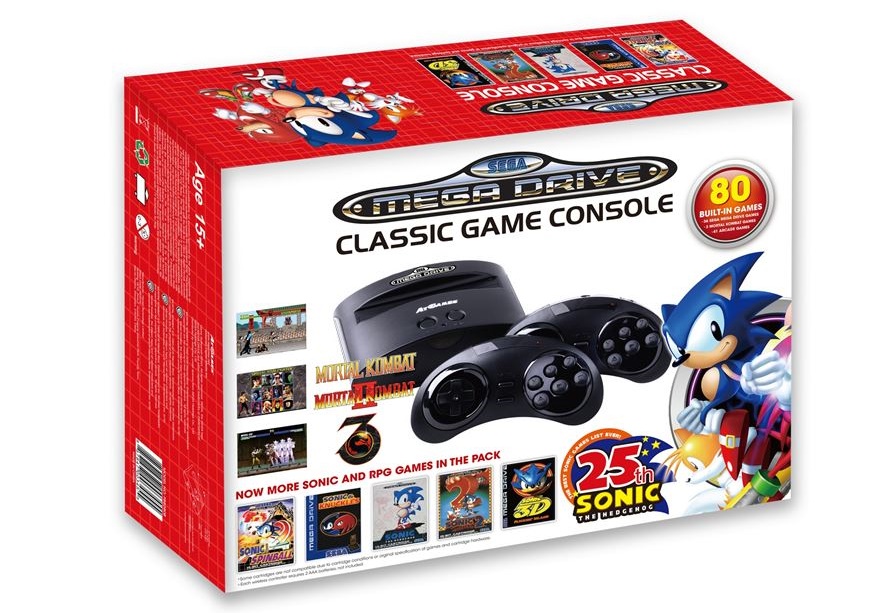 Compared to the Nintendo Mini NES this classic console from SEGA is a real win, not only offering 80 games but compatibility with SEGA MD cartridges from all regions. Unlike the Nintendo Mini NES the Classic Mega Drive will also offer two wireless controllers, allowing owners to avoid cable clutter and play multi-player games without needing to but an additional controller.

2016 is quickly turning into the year of nostalgia, but if you are looking for a classic console it seems that SEGA offers significantly more for its price point of £49.99, which is the same as the price for Nintendo's Mini NES.

You can join the discussion on SEGA's Classic Mega Drive Mini console on the OC3D Forums.

Hot on the heels of Nintendo, Sega has announced a Mega Drive Mini Console.https://t.co/0g1Ja7BY9D pic.twitter.com/DFwcJp4bzp

Thelosouvlakia
Nintendo's plan to release the mini nes must have ringed an alarm at Sega's HQ, nice to see, so many people will hoard and buy those thingsQuote

Rwoody81
The Sega console is clearly a better value, but I'll probably end up buying both. The classic Super Mario Games alone make the NES console worth it in my opinion.Quote

They were designed with CRT displays in mind.Quote

Greenback
be interested in what games come pre-installedQuote
Reply