Well, we can't deny that the RX 590 exists anymore can we?

Sapphire's RX 590 NITRO+ Special Editon graphics card has appeared on the virtual store shelves of Newegg Canada, revealing the graphics card's specifications and a few of its key features.

For starters, the GPU will feature a two-way BIOS switch, allowing end-users to select a noise-optimised "Silent" mode and a performance-centric "NITRO+ Boost" node, which increases the GPU's core and memory clock speeds, enhancing the graphics card's performance levels.

In quiet mode, the RX 590 NITRO+ Special Editions can boost to 1545MHz, and the GPU's GDDR5 memory can operate at 2000MHz, with "NITRO Boost" mode offering a higher boost clock speed of 1560MHz and a memory clock speed of 2100MHz. When in "NITRO+ Boost" mode is clocked higher than any aftermarket RX 580 graphics card, a factor which may be enough to surpass Nvidia's GTX 1060 in most modern games.

Right now the AMD R9 590 NITRO+ Special Edition is priced at $499.99 at Newegg Canada, though this is likely to be a placeholder price. 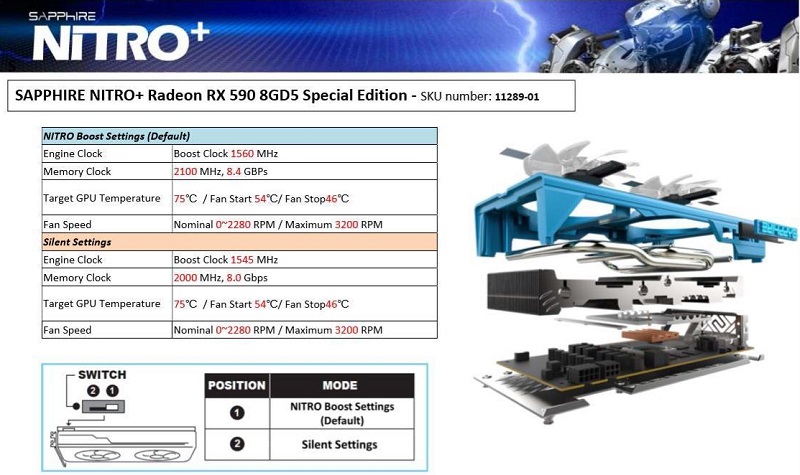 You can join the discussion on Sapphire's RX 590 NITRO+ appearing on Newegg Canada on the OC3D Forums.

Draco42
Quote:
Something else to add to my wishlist me thinks.Quote

g0ggles1994
I genuinely pray this is just a placeholder price. The RX 590 will be dead at the gates if this is the actual retail price.Quote
Reply