A new Radeon GPU is on the Horizon

While AMD didn't reveal any new consumer graphics cards at their "New Horizon" event, we can be content in knowing that we have at least on new gaming-grade Radeon graphics card coming this year, releasing in the form of AMD's long-rumoured Radeon RX 590.

At this time the exact specifications of this new Radeon graphics card have not been confirmed, but we know that it will make use of a 12nm fabrication, which is likely to be Globalfoundries' 12nm lithography node.

Videocardz has managed to snag a few pictures of Sapphire's Radeon RX 590 NITRO+ Special Edition graphics card, which sports the same cooler design as the company's existing RX 580 NITRO+ Special Edition, supporting the theory that the RX 590 is a 12nm version of AMD's mid-range RX 580. In their article, an expected launch date of November 15th is also mentioned, suggesting that this is the date that AMD will officially unveil the graphics card, or release it on store shelves. 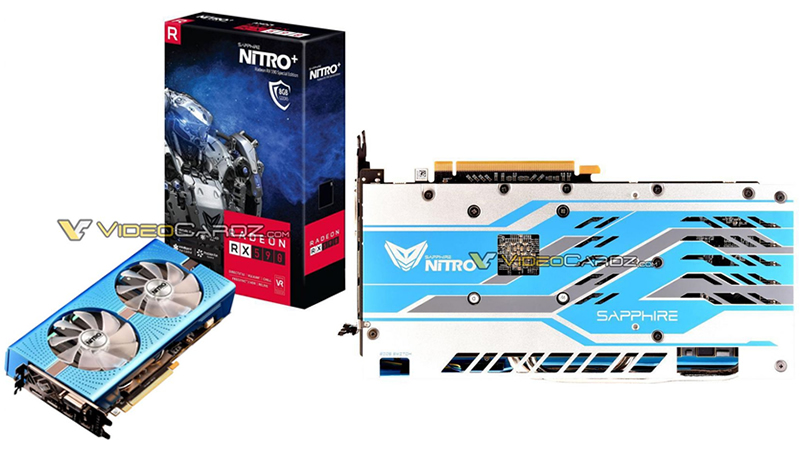 Though the use of 12nm, AMD's RX 590 is expected to offer higher clock speeds than AMD's 14nm graphics cards, which will make the RX 590 a lot faster than the 14nm RX 580. ASUS and PowerColor are reportedly planning to release their own RX 590 series graphics cards in the near future.

You can join the discussion on Sapphire's RX 590 NITRO+ Special Edition graphics card on the OC3D Forums.

That would be an awesome pair if they were not so far apart.Quote

g0ggles1994
Quote:
How about something this? First one that came to my mind
https://asset.msi.com/resize/image/g...a9ba1/1024.pngQuote

WYP
Wow, ASUS Blue. That's a blast from the past.Quote

Wraith
Quote:
What about OC3D blue.