During the company's Q2 2019 earnings call, Samsung has confirmed that its plans with AMD's Radeon graphics tech will reach beyond mobile SoCs. Furthermore, Samsung stated that they expect their first chips to feature AMD graphics tech will launch in two years.

Samsung hopes that the "GPU competitiveness" of AMD will enable Samsung to enhance the performance of its mobile SoCs and other applications. This grants the company a competitive edge over its rivals. AMD will also benefit from this deal through Samsung's technology licensing fees and royalties. These fees will, in turn, provide AMD with the funding they need to improve their technology offerings further. This deal will give Samsung access to powerful graphics technology while enabling AMD to profit from a market that it's Radeon graphics technology would otherwise be unable to access. Samsung can build stronger hardware, and Radeon gets placed into the hands of more customers, everybody wins.

To answer your second question about our AMD partnership. As you know, AMD has been a leader, especially in the GPU area since the early days of the PC market and is one of the leaders in terms of technology. We think that with this partnership, we will be able to leverage the GPU competitiveness of AMD to enhance the performance of not only our mobile SOCs, but also in other applications.

But considering the usual time it takes to vet out IT technology, we expect that the GPU technology will start being adopted in products that will be launched two years down the road roughly. 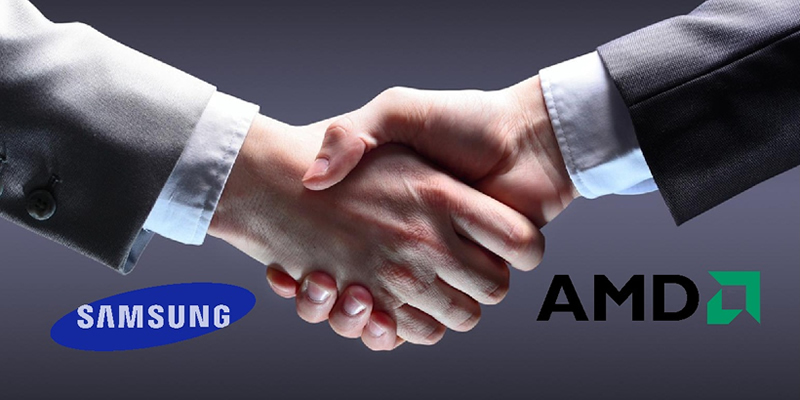 AMD's deal with Samsung marks a turning point for both companies, showcasing AMD as a company that can provide mobile-ready graphics components while enabling Samsung to gain a competitive edge in the mobile graphics market. Before the release of AMD's RDNA architecture, the company was often criticised for the relatively high power consumption of Radeon graphics products. Now, Samsung's confidence in AMD's IP shows us that things are changing, which is good news for gamers everywhere, but it on consoles, mobile and PC.

You can join the discussion on Samsung's plan to launch SoC with AMD graphics tech in two years on the OC3D Forums.

WYP
Article links have been fixed.Quote

NeverBackDown
Sorry to say Mark but the links still aren't working as intended. It's linking to a different article, specifically the ASRock and Intel mounting change instead of AMD and Samsung.Quote

WYP
Quote:
This is what happens when I mess with things soo late on a Saturday. Should be fixed now.Quote