HBM2 remains too expensive for most mainstream products

High bandwidth Memory, HBM, has had a difficult time in the consumer market. The memory itself is costly and is difficult to use thanks to its proximity to attached products. The large interposers that are required to attach this memory to a GPU, FPGA or other computational devices are complicated and not inexpensive, negating a lot of the benefits that are delivered by the standard.

Another factor that needs to be considered is demand, as while HBM2 memory is rarely seen in the consumer market, HBM2 is widely used to make professional-grade GPUs, FPGAs and other devices, with Intel, AMD and Nvidia all acting as large buyers of the new memory type.

At ISC 2018, Samsung reportedly stated that they could double their production of HBM2 memory and still not satisfy market demand, another factor that allows HBM2's pricing to remain high. This factor also makes HBM2 an extremely high margin product for HBM2 memory makers like Samsung and SK Hynix. 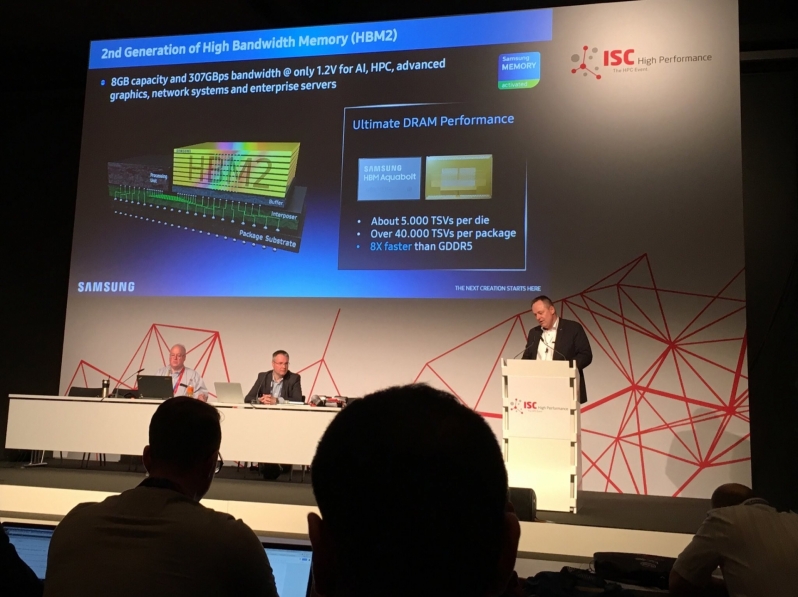 HBM2 memory has its benefits, Samsung's latest Aquabolt HBM2 memory modules can offer 8GB of capacity and speeds of 307GBps with a single memory chip, which is more memory bandwidth than a Nvidia GTX 1070 graphics card can provide. Not bad for a single chip that only requires 1.2V for power.

Another benefit of HBM2 memory is that it allows users to fit faster products into smaller spaces, as an equivalent GDDR5/GDDR6 setup would take up significantly more space and power, a factor which is useful for small form factor systems or products where power savings can have a huge impact on power cost and/or battery life.

As it stands, it looks like HBM2 will not receive much more adoption within the consumer market, as the cost of the memory is likely to be a lot higher than GDDR6, which is now being mass produced by Samsung, SK Hynix and Micron. HBM2 needs to become a lot cheaper before it can become anything more than a niche product.

You can join the discussion on Samsung's HBM2 supply failing to meet demand on the OC3D Forums.

demonking
So Samsung are saying they can sell double and still not have enough but aren't?
Why?Quote

WYP
Quote:
They use the same production equipment to make other types of DRAM, so they are very manufacturing constrained. New fabs take ages to build. Pretty much the same reason why DRAM prices are high.Quote

demonking
Quote:
- Make sense, they don't want to end up where Nvidia are now I suppose.


Quote:
I think the Chinese government don't agree with you there

. It'll be interesting to see where that goes. Other than onto the price if they do get finedQuote

WYP
Quote:
We still need to see where everything settles in that regard, but remember that they could be doing the same thing with HBM as they do for other types of DRAM. They use the same manufacturing tech, so constrain (real or faked) will affect other types of DRAM.

There is a reason why I said it is the same reason why DRAM prices are high, instead of elaborating further.Quote
Reply