As with all new graphics architectures, there remain several mysteries surrounding Nvidia's Turing architecture that are unsolved, but now it appears as if one of these secrets has finally been solved.

While creating their next version of GPU-Z, Techpowerup took note of this phenomenon and have asked "industry sources" if they can provide an answer to their "what is -A?" question. Usually, Nvidia only creates a single ASIC code for a product, whether it be Reference, Founders Edition, custom or factory overclocked. These codes are typically used to differentiate Workstation products from their gaming-grade counterparts.

The answer to this question is simple, -A products are intended to custom models that AIB partners can release with Factory overclocks and non-A models are designed for reference graphics cards with MSRP pricing. They are the same chips, but they are separated by binning and are sold to Nvidia's AIB partners with different price points.

When it comes to -400/non-A models, Nvidia's AIB partners must ship products that are limited, without any factory overclocks over Nvidia's reference specifications. Thankfully this limitation is not forwarded onto end-users, who are allowed to overclock their graphics cards as they see fit. 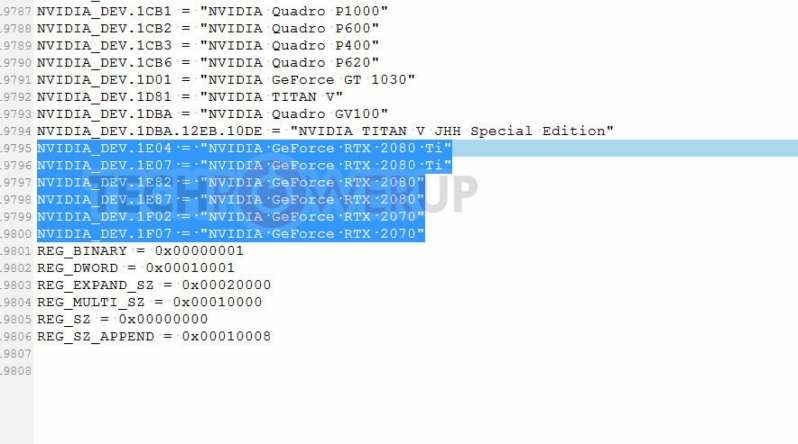 Assuming that these findings are correct, the mystery of the -A has been solved, showcasing the strict limitations that Nvidia has placed on their AIB partners, and what they have done to ensure to their AIB partners create low-cost MSRP graphics card models.

Should end-users be concerned about this? No, this is no reason for alarm, these restrictions do not limit overclocking from the perspective on users, though it does mean that reference RTX 20 series graphics cards are likely to use lower-binned silicon.

You can join the discussion on Nvidia banning factory overclocks on select Turing/RTX silicon on the OC3D Forums.

Lazlo
I don't want to be an a-hole but AIB stands for "Add in Board". A lot of people on here use AIB when they mean AIB Partners. TBH I was confused at first till I realized what was meant.Quote

WYP
Quote:
No worries mate, I will bear that in mind in future. The first couple of instances of AIB has been clarified to say AIB partners.

Thanks for the input.Quote
Reply