Navi has a lot of untapped potential

AMD's Radeon RX 5700 XT has been pushed past 2.2GHz through soft-modding

What happens when you push AMD's Radeon RX 5700 XT past its limits? What if the strict power limitations set by AMD could be bypassed? How fast could Navi be when we, combine soft-modding techniques and advanced cooling solutions?

Tom's Hardware Germany has been hard at work to get the most out of their AMD Radeon RX 5700 XT. The site's overclocking expert, Igor Wallossek, has placed their RX 5700 XT under an early EK water block sample and has bypassed AMD's stock power limits using SoftPowerPlay Tables (SPPTs). The latter change requires edits to the Windows Registry, making it an advanced technique for newcomers to overclocking.

When it comes to raw performance, AMD's 2.2GHz Navi RX 5700 XT can start trading blows with an overclocked RTX 2070 Super in Shadow of the Tomb Raider, which is an incredible result given Navi's pricing. That said, this mod required the use of water cooling components, which is an expensive add-on. Even so, this paints a bright future for Navi once custom models release, as they typically utilise capable aftermarket cooling solutions. 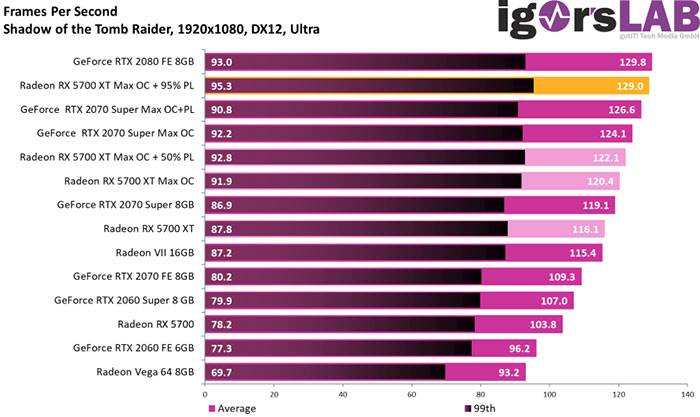 When using power mods, it's unsurprising that the power consumption of AMD's RX 5700XT increases. The extra power draw in converted into higher clock speeds and increased GPU performance, and all things considered, 250W of power isn't that high.

Navi represents a major step forward for Radeon, both in terms of raw performance and in terms of power efficiency. It will be interesting to see how well custom Radeon Navi graphics cards from the likes of MSI, ASUS, Sapphire and Gigabyte perform, as Navi seems to benefit from strong coolers and increased power limits.

You can join the discussion on AMD's Radeon RX 5700 XT getting overclocked past 2.2GHz on the OC3D Forums.

Giggyolly
I'm getting more and more optimistic about Navi as time goes on. If the architecture is capable of those clock speeds at very reasonable power draws (albeit through mods), then the silicon is capable at performing.
Now what we need is a big part with 56 or 64 CUs, clocked at 2ghz. stack another 30-50% more performance onto the 5700xt, and we've got a high-end competition in the GPU market. Lovely.Quote

AlienALX
Quote:
I can assure you Nvidia will be ready and have everything they need to make Navi look poo. I hate saying it but it's true. Just because Nvidia have slowed down does not mean they're not marching on behind closed doors.

If AMD release anything that even goes near the 2080ti Nvidia will release their next gen and bury it. The next gen that was due by now but hasn't happened because AMD are so far behind.Quote

tgrech
NVidia are waiting till Samsung's EUV node is ready. IE; they don't, for a fact, have a response to the first round of Navi cards. Any new gen from Nvidia couldn't possibly be ready for mass sale before Q1 2020 given the amount of build up required for parts like these and the known availability of Samsung's full 7nm process. Both companies are currently operating at the absolute limits of what physics would allow and neither are holding back any technology in any sense of the word.Quote

Giggyolly
Quote:
I mean they can't do another release on 12nm, their dies are already way too big on the 20 series. So yes 100% possible if they jump to 7nm. But are they really in a position to ramp up production on the next architecture? Who knows.

tgrech
Quote:
We do because it's publicly available information from Samsung(And NVidia has publicly committed to that node for their next gen). Mass production for 7LPP started in June so only small low volume products(Like smartphone SoCs) could realistically have commercial availability this year, usually you're looking at about 18 months between mass production starting and commercial availability for GPUs. The TSMC node used for Navi started mass production towards the end of 2017 for reference. A push for a quicker launch would just mean a paper launch basically.Quote
Reply