These Hellhound GPUs are real beasts

PowerColor has a new set of Hellhounds, their their fans can be set to ice blue or amethyst purple 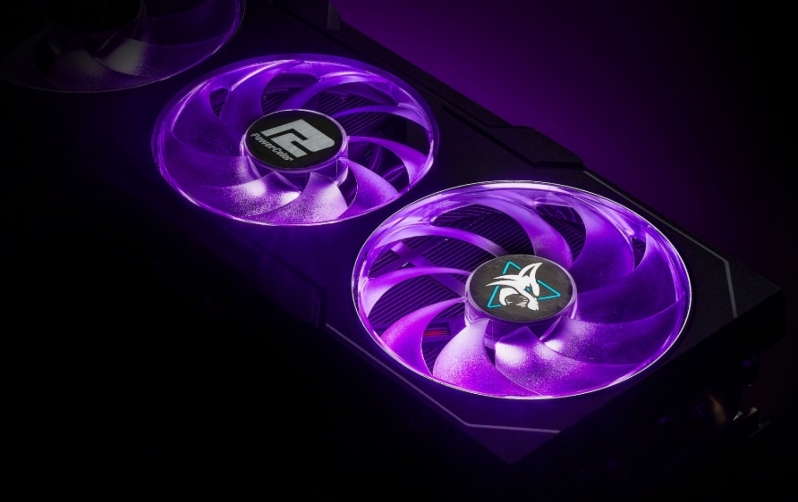 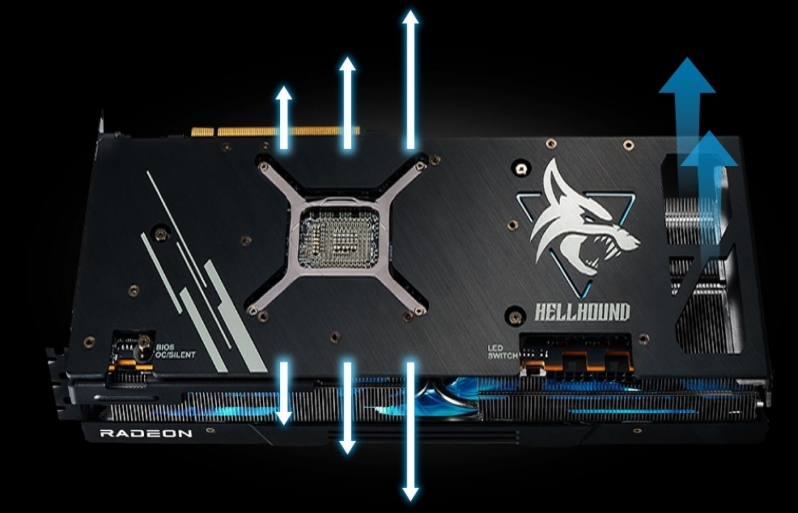 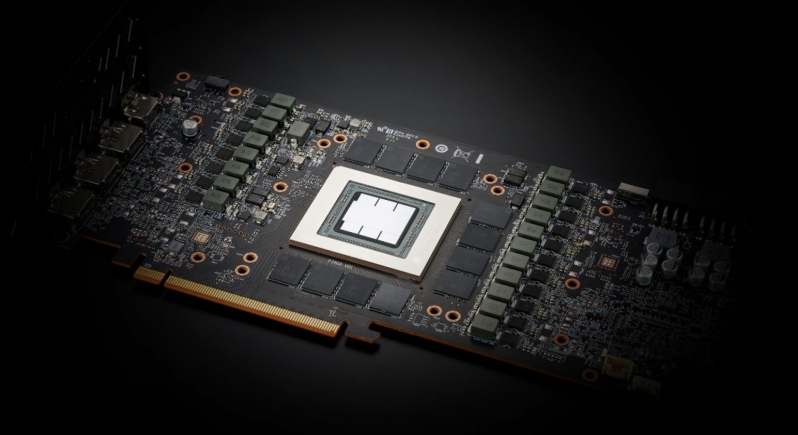 The heatsink of PowerColor's RX 7900 XT/XTX Hellhound graphics cards feature set of eight nickel plated copper heatpipes that sit on top of a GPU direct contact copper plate, which is attaches to both AMD's NAVI 31 GPU core and its GDDR6 memory. 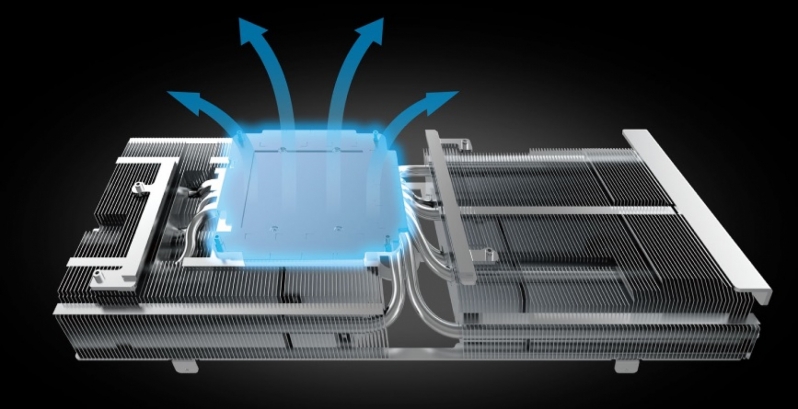 Another upgrade that PowerColor has given to its Hellhound series of graphics cards is its new ring-blade fan design, which PowerColor claims have given then GPU thermals that are three degrees cooler than before. This design also makes damaging your GPU's fans a less likely occurrence, as it is hard to break individual blades on a ring blade fan. 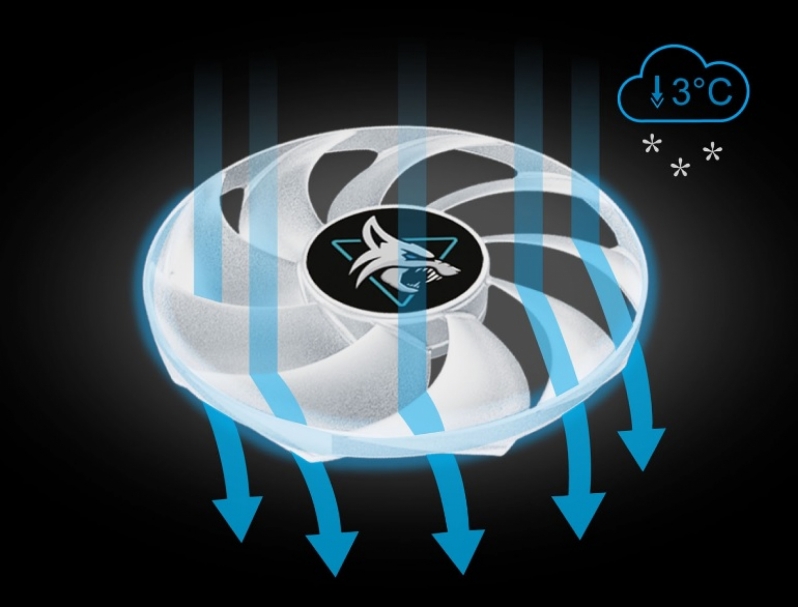 You can join the discussion on PowerColor's RX 7900 XT/XTX graphics cards on the OC3D Forums.

dazbobaby
A GPU to be excited about, if only because they're affordable.Quote

ET3D
Quote:
It's a sad day when a $1000 card is called affordable.Quote

AngryGoldfish
Quote:
I do understand the frustration many have, but inflation isn't necessarily always bad. Inflation validity is a whole other topic, but for now...

...A 780Ti was $700 at release, right? Sold today, that would be $1000. That $700 GPU was not 'affordable' to 17-year-olds who've been saving up doing the paper round before school. But it was to enthusiast PC gamers who had a reasonable income. I had a friend who lived with his grandma and worked night shifts at a petrol station to buy a 512GB SSD, 16GB of RAM (at a time when they were waaaaaay more expensive than they are now), and a GTX 780. That hasn't changed. $1000 is only within reach of enthusiast PC gamers who have a reasonable salary and who prioritise their PC. It's not an absurdly high price given the market and what goes into these GPUs.

Comparing it to guitars, which is a bigger priority for me personally, $1000 is only just enough for a midrange guitar. A high-end guitar starts at $2000 and goes up to $20,000. That's a piece of wood with some metal and magnets. Guitar pedals that only delay the signal in creative ways can cost $700. It literally just takes your signal input and repeats it back in pretty ways. That's all it does. $700.

The other day I needed a new belt, and I dislike hole belts because if the hole is the wrong place then you won't get a good fit, so I like ratchet belts. I accidentally Googled designer belts without realising and clicked on a website called selfridges. At first I was confused, because I thought this belt must be part of a suit with shoes and tie. But it was just a belt. It was 590. A piece of leather with a buckle costs 590...apparently.

PC hardware is actually an extremely affordable hobby compared to others. Gaming is one of the most cost-effective hobbies given how much time you can give to it with how little it costs to do so. You can spend 1000 on a PC and play your favourite game for 3,000 hours. That's, what, three years of gaming 2-3 hours per day? I can guarantee that no guitarist plays that one delay pedal that cost them $700 for 3,000 hours.

And what goes into building a $20,000 guitar? Virtually anyone can learn how to do it. There are hundreds of boutique guitar builders doing so. But having only two competitors in the GPU market shows how incredibly difficult it is to design a GPU. And all that GPU does is make your game go faster.

In terms of high-end hardware, $1000 is 'affordable'... in my opinion. As someone who earns very little money per year, even I could theoretically afford $1000. If I saved up for a few months and stopped buying craft beer or speciality coffee, I could do it. Again, I am well below the income levels of a middle class Irish household. I just know where my money goes and know that if I wanted a really nice holiday or a new guitar or a new computer, I'd have to forgo other things in order to afford it, or save for a long time. Therefore, $1000 is affordable. If a guy like me can afford it, it's affordable. Again, that's my opinion. It would be silly for me to invest that much into a graphics card that just makes my computer games go zoooooom faster when there are other things that bring me more joy and lasting satisfaction, but still.Quote

Warchild
Not sure Guitar is a good comparison.

Guitars can last forever and not deteriorate. They do not always depreciate and sometimes do the opposite. The sound over time is consistent even as the technology around evolves. And I won't go into guitar pedals because DSP was my speciality at university, and it is quite complex as opposed to making "pretty sounds"

What is a good point is that PC hardware being affordable compared to other hobbies. The low-mid-high end ranges are quite far apart so even on a budget you can get a good working machine capable of playing the latest titles at a sacrifice. It's far cheaper for me to enjoy PC gaming, when compared to my addiction with Guitars and Mountain biking

The comment about $1000 being affordable is subjective. You come work here in Norway, and your average 17yr old working in McDonalds albeit not needing to pay rent etc, can easily afford one after a month. As mentioned inflation will happen, but you can't keep living in the past thinking the high end market will remain between 700-1000 forever.

The problem I see in "some" countries is not inflation, but the fact that salaries are not increasing anywhere close to what others do. Mine goes up 5-10% a year, but I know UK workers wont see anything like that at all seeing 2-3% if they are lucky. Companies look at the market overall e.g. US, Europe, Asia. And set the price based on that. They dont look at specific countries.Quote
Reply