This GPU is expected to be PowerColor's RDNA 3 flagship

PowerColor has started to tease their Radeon RX 7900 Red Devil graphics card design, a GPU that is likely to be the company's flagship RDNA 3 design, and one of the most powerful Radeon graphics cards on the market.

AMD's launching their Radeon RX 7900 XT and RX 7900 XTX on December 13th, and PowerColor is ready for this launch with both Red Devil and Hellhound (more information here) designs. Like the Hellhound, PowerColor's new Red Devil graphics card features a triple-slot heatsink design, with the model appearing to be thicker than three PCIe slots.

We expect PowerColor's new Red Devil graphics card to feature RGB LED lighting, though we expect this GPU's default colour scheme to be red and black, like all modern Red Devil series GPUs. 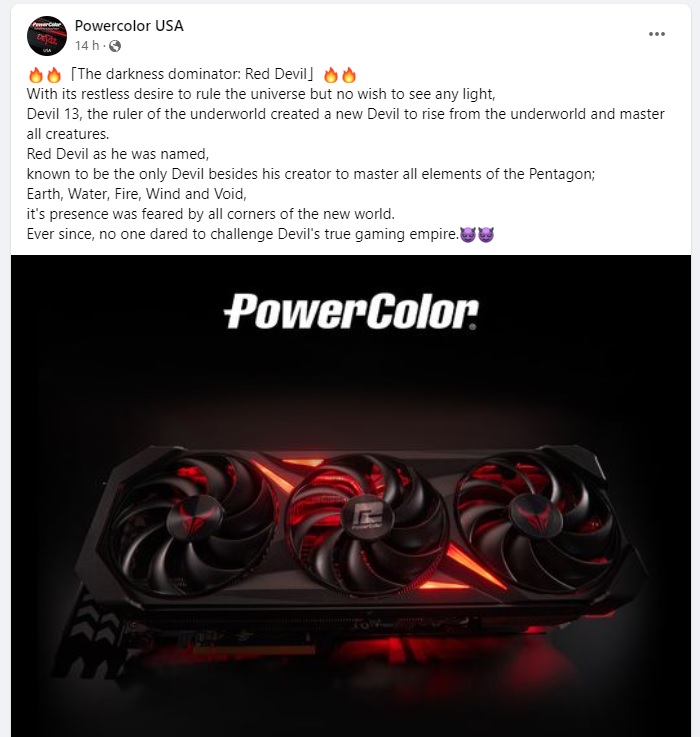 Sadly, the exact pricing and specifications of PowerColor's Radeon RX 7900 XT/XTX Red Devil graphics cards or their planned pricing. We expect this graphics card to sit on the premium side of the RX 7900 series pricing spectrum, though it remains to be seen where these prices will lie.

You can join the discussion on PowerColor's Radeon RX 7900 XT/XTX Red Devil graphics card on the OC3D Forums.

Warchild
Probably one of the few cards where I like the red.Quote
Reply