That price is devilishly high!

Powercolor's upcoming RX Vega 64 Devil GPU has been listed by Overclockers UK, offering a price of £589.99 for Pre-Orders and a factory overclock.

This custom RX Vega 64 GPU design features a 2.5-slot cooler, an extended PCB design and a triple fan cooler, with previous leaks for this GPU showcasing two dip switches on its PCB, the first of which is a three-way switch that will allow users to switch between three different BIOS files as well as a switch that will control the GPU's LED lighting on its Red Devil logo. 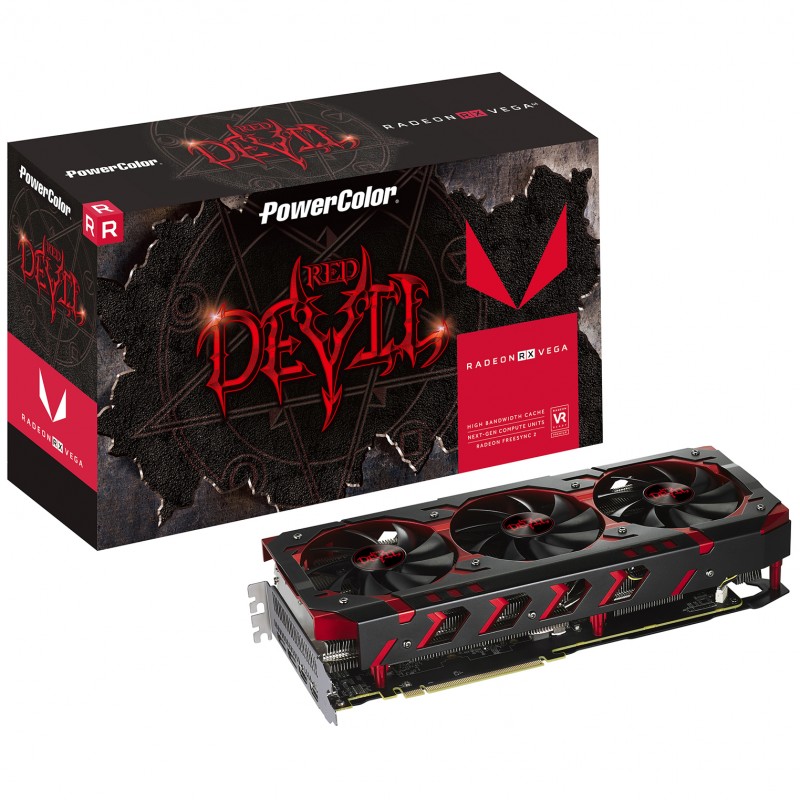 This is the first custom RX Vega GPU that has been shown at retail, hinting at a launch relatively soon. This GPU's listed price of £589.99 is a pre-order price, which is subject to change given the asterisk beside the GPU's current list price. We have contacted Powercolor to get an official retail price for their custom RX Vega 64 GPU.

It should only be a matter of time before we see other RX Vega GPUs appear at retailers.

You can join the discussion on Powercolor's RX Vega 64 Devil on the OC3D Forums.

g0ggles1994
Same as I have said with Vega as a whole; too little, too late and too expensiveQuote

AlienALX
It's beautiful it really is. I love the design, love the colours etc. Just too much cash.Quote

looz
It might perform really well if it manages to never throttle, and finally deliver the 1080 killer promise while making your PSU weep.

I love the look of it.Quote

AngryGoldfish
Oh dear, oh dear. I'm glad I didn't wait for non-reference Vega. £590 is competitive in that it competes with Nvidia at that price point, but it does so 16 months too late and with a much higher TDP. That would be grand if it actually matched a 1080Ti, but it doesn't.

AMD, you delivered none of those things. It has the TDP of a 1080Ti (higher in fact), but not the performance. It has the price of the 1080, but not the availability or TDP. If I were only buying one GPU for the next 3-4 years I'd probably buy a Vega 56 or 64, but that's not me.Quote
Reply