The first AMD custom RX 5700 XT designs are due to release within the next two weeks, allowing PC builders to access the power of Radeon's Navi architecture without being held back by the GPU's reference design.

It is easy to see why custom GPU designs are highly sought after. For starters, they typically feature factory overclocks, promising increase out-of-the-box performance. Second, they often feature larger, more capable cooling solutions, enabling lower temperatures under load, lower noise levels in some cases and increased overclocking headroom in others.

PowerColor is one of the graphics card makers which plans to release a custom version of AMD's Navi-powered RX 5700 XT. Below is the company's upcoming RX 5700 XT "Red Devil", which will feature a factory overclock, a triple-fan cooler design, a 2.5-slot cooler design and a dual 8-pin power design.

The PowerColor RX 5700 XT Red Devil will feature an LED (likely RGB) illuminated logo on the graphics card's PCB, On the rear I/O it is also likely that the graphics card will support three DisplayPort 1.4 inputs and a single HDMI 2.0b output, though this has not been confirmed. 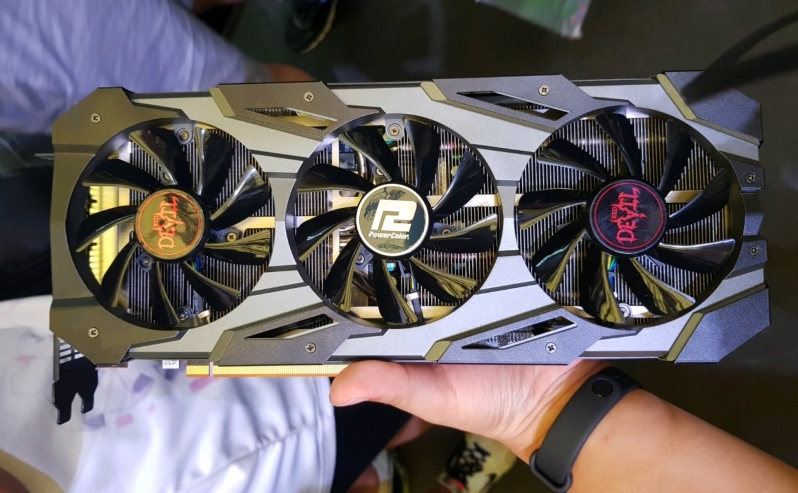 The Red Devil series has long been PowerColor's flagship overclocking model, making it likely that the RX 5700 XT will have the highest factory overclock that the company plans to release for AMD's RX 5700 series. Lower-end RX 5700/5700 XT models are also possible, but the Red Devil name is always reserved for the company's top SKU.

You can join the discussion on PowerColor's Radeon RX 5700 XT Red Devil graphics card on the OC3D Forums.

AlienALX
Quote:
TBH I don't really rate the Devil 64 cooler. It's one of the best looking cards I've ever had but the cooking is meh.

I think I should put new paste on mine. Might try ceramique.Quote
Reply