Rumour has it that AMD will be officially launching its Radeon RX 6600 XT graphics cards soon, adding a new graphics card to the market that should help to alleviate the overall market's supply shortfall.

AMD's Radeon RX 6600 XT will be AMD's lowest-end RDNA 2 graphics card to date, a fact which should hopefully help AMD produce these GPUs in larger quantities and with a low price tag. PC gamers can expect the same DirectX 12 Ultimate features as before, though it remains to be seen if these GPUs will remain in stock for long.

Thanks to Videocardz, we have learned that PowerColor's RX 6600 XT Fighter, Hellhound, and Red Devil graphics cards have been listed at PBTech, a New Zealand retailer.

These early retail listings suggest that PowerColor will be launching RX 6600 XT graphics cards in Fighter, Hellhound and Red Devil flavours. The exact specifications of AMD's RX 6600 XT are currently unknown, though PBTech lists the graphics card with 8GB of GDDR6 memory and PCIe 4.0 support. 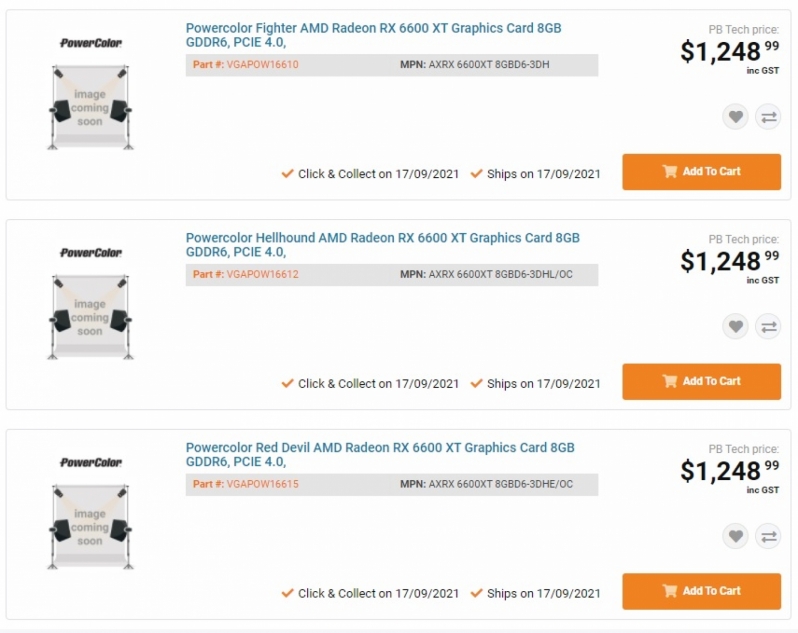 With 8GB of VRAM, the Radeon RX 6600 XT will have enough memory to support all modern PC games; that said, it will be one of the only GPUs on AMD's RDNA 2 product line to have less memory than its likely Nvidia competitor, the RTX 3060, which has 12GB of memory.

You can join the discussion on PowerColor's RX 6600 XT GPU listings on the OC3D Forums.