The Red Dragon is coming!

The TUL Corporation has unveiled their new PowerColor RX Vega 56 Red Dragon GPU, a graphics card which is designed to offer a low-cost option to the RX Vega lineup while still delivering stellar cooling performance.

This goal was achieved thanks to the RX Vega 56 Red Dragon's shortened PCB, which allows the rear GPU fan to push air through the card unhindered, with no PCB or backplate to constrain airflow over his GPU's cooling fins. This compact PCB design is how PowerColor can achieve low operating temperatures while using a smaller overall heatsink design.

When compared to PowerColor's existing RX Vega 56 models this GPU will sit between AMD's reference design and the RX Vega56's Red Devil OC edition, though at this time PowerColor has not officially revealed the GPU's base clock speed. 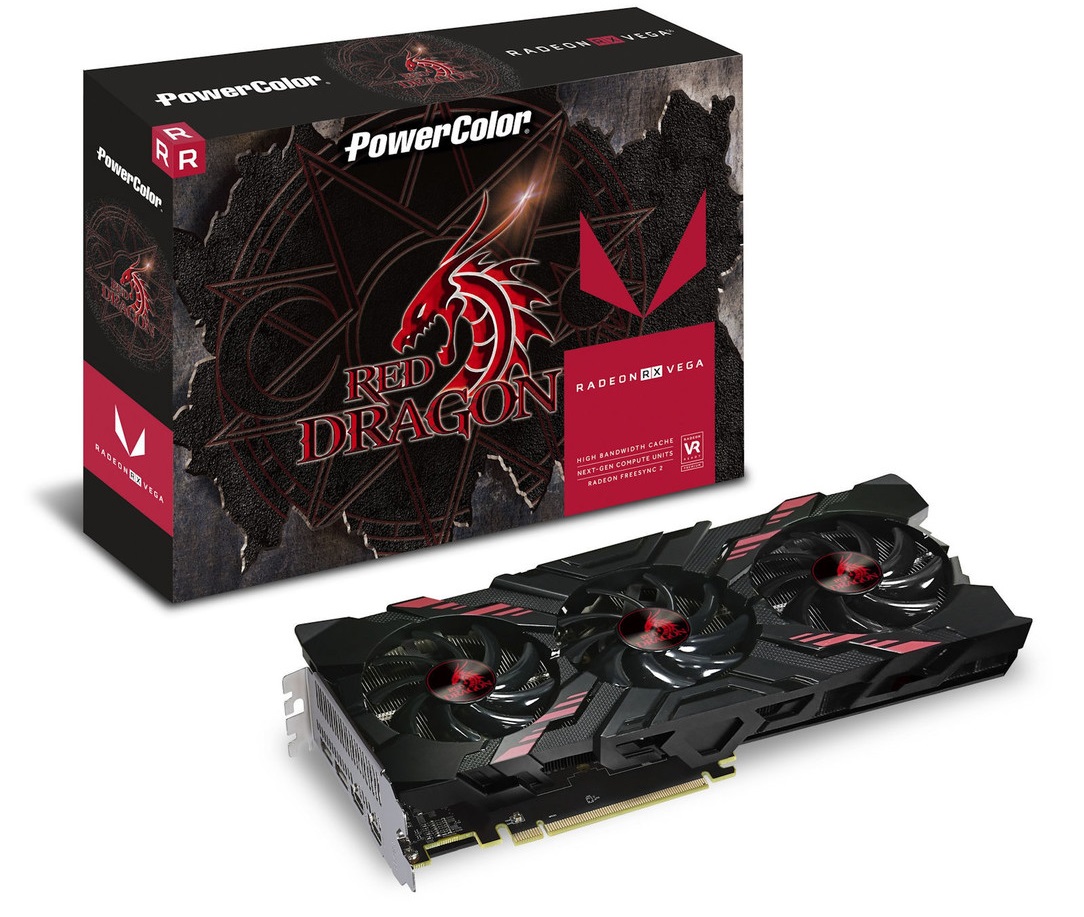 This GPU comes with a BIOS switch which allows this GPU to run in either a silent or overclocking mode, depending on the user's preference. PowerColor says that this GPU will become available worldwide on March 28th.

You can join the discussion on PowerColor's RX Vega 56 Red Dragon GPU on the OC3D Forums.

WYP
Quote:
The same amount of heat is dumped into the case regardless, the only change is that the heat moves away from the GPU faster. CPU temps wouldn't change much, at least not enough to matter.

If you want the heat from your GPU outside of the case before it hits the CPU you need to get a blower-style card.Quote

Dark NighT
Or if you using an AIO put the rad in the front.Quote

I've been putting them in front whenever possible simply due to the fact that GPU temps go upward and I've never ever liked having to twist or kink cables to make it an exhaust setup...plus it looks like crud to me

Build I'm working on currently for a cousin. Obviously very incomplete as I was to tired yesterday after work to really put a lot of effort into making it complete in one night when he isn't even getting it for another week..so I've got loads of time.Quote

Wraith
This was tasted extensively by Jayz and Gamers Nexus which if I'm honest hits on good points but the results are neither here nor there. As a general rule if you have a GPU it's wise not to feed it pre radiated (warm) air and don't restrict its air feed. I'll always put the rad as an exhaust and give the GPU an extra fan in the back of the case to help get rid of that heat.

Let the case do the work. (case dependant obvs) I'm still waiting on my meshify front panel for the Define C as the stock front is restrictive.Quote
Reply