The VR headset is expected to release sometime in 2016, but the main stumbling block for the headset is the performance of the PS4, though Sony representative also claimed that this first generation Playstation VR headset will be supported throughout the lifespan of the PS4.

Sony has already deemed that a stable 60fps is the Minimum required for VR gaming, but is pushing for 90fps to be the Standard for play as even a stable 60FPS can cause users discomfort while using VR.

As Sony says that "Going fast is not optional" when using VR, as a higher framerate and display refresh rate will counteract the side affects of motion sickness and other side effects of using VR. In VR you will notice the disconnect between your movement in real life and your movement in-game, so lowering the delay between action and visual response is crucial, making increasing the framerate a vital step when moving to VR.

These findings are very similar to the findings of Oculus and HTC/Valve, since both the Oculus Rift and the HTC Vive headsets use displays which run at 90Hz, though with such a high refresh rate it can be argued that the PS4 will likely be unable to run many visually demanding games while using VR headsets, especially given how few 1080p 60FPS games that are currently available. 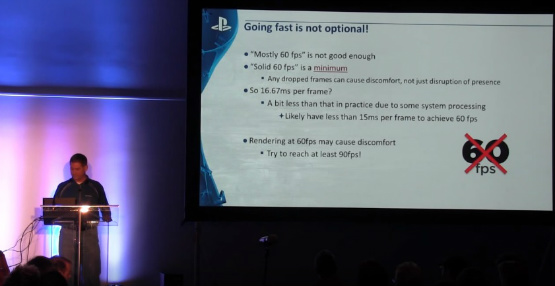 2016 is likely going to be the year that VR finally takes off, with the Oculus Rift and HTC Vive finally releasing to consumers. Sony is making great progress with their Playstation VR headset, but right now it is very concerning that they have listed a steady 60 as a minimum, regardless of the fact that the same slide from Sony says that this will cause discomfort to users.

You can join the discussion on Playstation Sony's VR Headset on the OC3D forums.

A Sony rep has stated that PlayStation VR will cost $299, half the price of the Oculus.https://t.co/ipPVKFzUwS pic.twitter.com/2zHT7P6r00

Kushiro
Wow, was not expecting such a big difference.Quote

NeverBackDown
Doesn't it also need an external box that helps aid in processing?Quote

AlienALX
Quote:
I was. Just another example of how PC gamers are exploited and conned.Quote

Greenback
B4 you get to excited wait to see what the controllers and camera will cost, and the games to play it withQuote

barnsley
So $299 for a usb face mounted screen basically.

This will not cover the entire extra console you'll need to run in order to get that framerate they've set UNLESS this is going to be a <720p experience..Quote
Reply