The perfect display for Xbox Series X and PC?

Philips has officially launched their first "Designed for Xbox" monitor, the Momentum 559M1RYV, a 55-inch monitor with full HDMI 2.1 support, and validated "Xbox Game Mode" that ensures that the screen delivered a tuned gaming experience for Xbox Series X/S users.

What follows is Philips' UK press release for their Momentum 559M1RYV. Philips has confirmed that they have more Designed for Xbox gaming displays in the works.

Unlike televisions, Philips Momentum gaming monitors are built for console gaming, with low latency and low lag as priorities to provide a much smoother, more realistic gaming experience. The series' low input lag is a great advantage when playing twitch-sensitive video games, allowing the input to register on the screen faster. The flagship 55" Philips Momentum (559M1RYV) will include a specially designed speaker enclosure from the engineers at Bowers & Wilkins, the British loudspeaker company globally renowned for their innovative designs and sound engineering, that completes the experience. 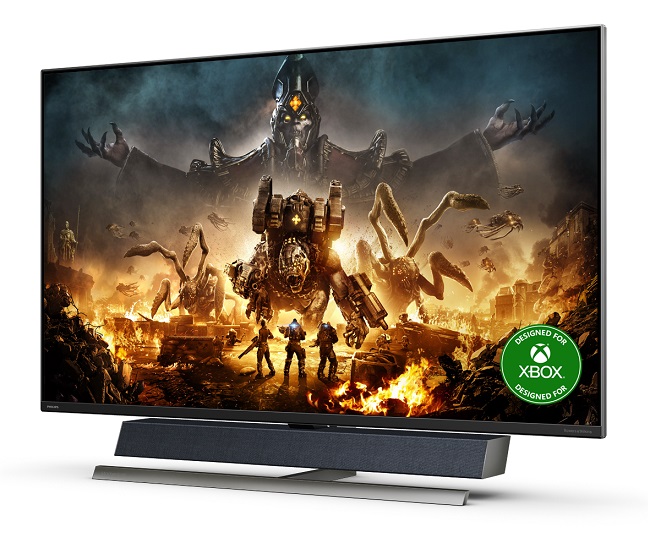 A new frontier in console gaming

Unlike televisions, Philips Momentum gaming monitors are purpose-built for consoles, with low latency and low input lag as a priority to provide a much smoother, more realistic gaming experience. The series’ low input lag is a great advantage when playing twitch-sensitive video games, allowing your input to register on the screen faster. The flagship 55” Philips Momentum (559M1RYV) includes a specially designed soundbar from the engineers at Bowers & Wilkins, a British loudspeaker company globally renowned for their innovative designs and sound engineering, that completes the experience.

This new Philips Momentum monitor delivers Designed for Xbox validated performance with ultra-clear 4K resolution at a minimum 120 Hz refresh rate, HDR support with DisplayHDR 1000 certification, Variable Refresh Rate for smooth gaming and Always Low Latency gaming. The team has worked together to create Xbox Game Mode, an exciting mode with specially tuned picture quality for the Xbox. The monitor has been extensively tested and validated by the engineers at Microsoft and TPV to ensure perfect compatibility, while also meeting the high expectations of dedicated Xbox fans.

“At Xbox, we’re always looking to give our fans choice in how, what and where they play their favourite games. Today, we’re excited to announce our partnership with Philips monitors to deliver the first Designed for Xbox monitors, giving fans a unique display with technology and features that provide the ultimate console gaming experience for Xbox Series X|S.” – Matt Kesselring, Director of Xbox Hardware Partnerships

“Philips Momentum lead the way in console gaming with its launch in the market and still does with such an important partnership. Impressive and immersive to the core, the Momentum console gaming monitors will make the new Xbox and its features shine, for the most exciting and complete gaming sessions.” – Stefan Sommer, Director of Marketing & Business Management Europe in MMD

The new Philips Momentum monitor, Designed for Xbox, will be available as follows:

This is just a first step in this new Designed for Xbox gaming line: more models are yet to be announced in the following months. In the meantime, thanks to the new HDMI 2.1 spec, the new Philips Momentum 559M1RYV will enable an amazing gaming experience with 4K resolution and a 120 Hz refresh rate on all next-gen consoles.

You can join the discussion on Philips' Momentum 559M1RYV Designed for Xbox Gaming Monitor on the OC3D Forums.