PALIT is prepping two GTX 1660 Ti SKUs, utilising Nvidia's TU116 core and Turing Shaders to offer performance levels that exceed the company's exceptionally popular GTX 1060 6GB. These two models are the Geforce GTX 1660 Ti StormX and the GTX 1660 Ti StormX OC, both of which use the same basic cooler and PCB design.

Videocardz has reported that both of these graphics cards will launch on February 22nd, with the StormX OC model featuring a factory overclocked core boost of 1815MHz while the non-OC StormX model features Nvidia's default core boost speed of 1770MHz. Both variants will use the same single-fan cooler and use 6GB of GDDR6 memory.

It has also been reported that this graphics card will feature 1536 CUDA cores, a 256-core boost over the Pascal powered Geforce GTX 1060 6GB, which combined with Turing's architectural enhancements will deliver a significant performance advantage for the GTX 1660 Ti.

The Geforce GTX 1660 Ti name likely signifies the fact that the 1660 Ti is the halfway point between Pascal and Nvidia's full-on RTX series of Turing graphics cards. Recent rumours have claimed that the 1660 Ti features no support for hardware accelerated ray tracing or AI accelerating tensor cores for DLSS. This means that the 1660 Ti uses Nvidia's Turing architecture but lacks Nvidia's RTX features, hence its GTX branding. 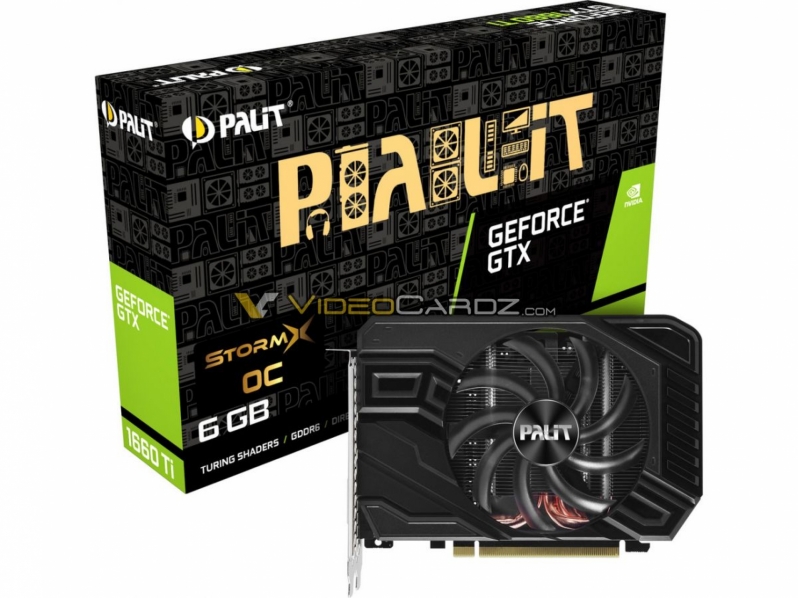 Last week, information about PAIT's GTX 1660 Ti was leaked via a Russian retailer, detailing the specifications of the GTX 1660 Ti StormX while lacking any images of the graphics card. This leak revealed that the GPU uses slower GDDR6 memory than Nvidia's RTX series GPUs, using 12Gbps modules instead of faster 14Gbps chips. This change gives the GTX 1660 Ti a disadvantage over the RTX 2060 in terms of memory bandwidth.

You can join the discussion on PALIT's GTX 1660 Ti graphics card on the OC3D Forums.

Dicehunter
Should've just called this a GTX 2050 to get rid of any naming confusion.Quote

tgrech
I guess they'd rather associate it with the reputation of the 1060(Their most popular GPU ever I think) than the reputation of the 2000 series, besides pitting this ass a half way point, but yeah I do agree this is a really awkward way to name it regardless of whatever justification is used.Quote

Piskeante
just another 1070 rebranding. Hope the price is below 250$.Quote