There will be no next-generation Rift...

Facebook has announced a bold new strategy for VR gaming, announcing that the company has no plans to release a successor to their Rift S VR headset. In lieu of this, Facebook has confirmed that its Quest 2 VR headset will support PCVR connectivity, despite the headset's standalone nature.

In Spring 2021, Facebook/Oculus plans to remove their Rift S and Quest headsets from the market. Both models will be replaced by the Quest 2, which is now available to pre-order with prices starting at $299/£299.

Facebook's Quest 2 VR headset will be powered by Qualcomm's Snapdragon XR2 CPU and will feature 6GB of system memory. The headset is said to offer a longer battery life than its predecessor and offer backwards compatibility with all Oculus Quest titles. Rift compatibility will come through the headset's Oculus Link connector, which will release as a standalone product.

Through improvements to Oculus Link, Quest 2 users will be able to utilise the full resolution and refresh rate of their headset. This feature will give them a full Rift-like VR experience with the convenience which comes sign single-cable connectivity and the ability to use your VR headset as a standalone device.

Oculus' Quest 2 headset will be the first VR headset which is "powered by Facebook", which means that users of the service will need a Facebook account to use this product. Quest 2 pre-orders are available today starting at £299 for the 64GB model and £399 for the Quest 2's 256GB model.

You can join the discussion on Oculus' Quest 2 VR headset on the OC3D Forums. 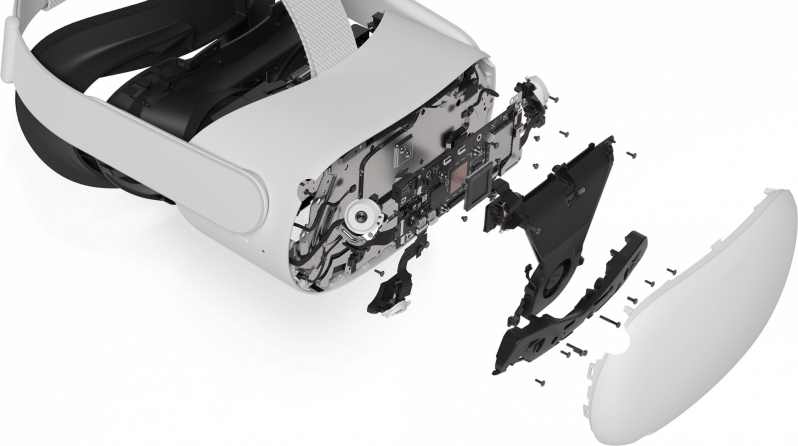 looz
I smell more bull coming from Facebook in regards to Oculus brand, which would not fly with PCVR users.Quote

Dark NighT
Facebook is like, i have this shotgun here, let me just shoot both of my feet and screaming that it doesn't hurt in ignorance.Quote

Greenback
I can see it going 1 of 2 ways, games will be made for the index and then downgraded to run on the quest, or if they sell enough the best games you'll get on the index will be ports over from quest much like we had with consoles at the start.
The £299 price is misleading every review says the cheap head strap is uncomfortable so you will need to spend £50 on the elite, and having thee quest 64Gb isn't much storage so in reality you will want the 256Gb + the Elite which is £448Quote

smilertoo
'powered by facebook' is why i'll be looking at something like the reverb g2 for my next headset.Quote
Reply