Nvidia works with OBS to deliver 66% improvement to NVENC Streaming

Nvidia are reducing the performance impact of single PC streaming

Nvidia works with OBS to deliver 66% improvement to NVENC Streaming

Over the past number of years streaming video games onto websites like YouTube Twitch and Mixer has exploded in popularity, prompting streamer to work towards maximising the quality of their content, leading some to invest in secondary PCs that are dedicated to the task.

While some streamers rely on the raw CPU grunt of secondary PCs to encode their video, most of us either don't have the budget for that kind of setup or would simply rather place that money into upgrading our mains systems. The downside of this is clear; your gaming PC will need to both play games and stream the video online without major dips to in-game performance or video quality, making GPU-based encoding methods popular, such as Nvidia's NVENC hardware encoder.

This change will allow streamers to aim for higher framerates and/or graphical settings, while also allowing them to avoid OBS' CPU sapping x264 encoders more easily. 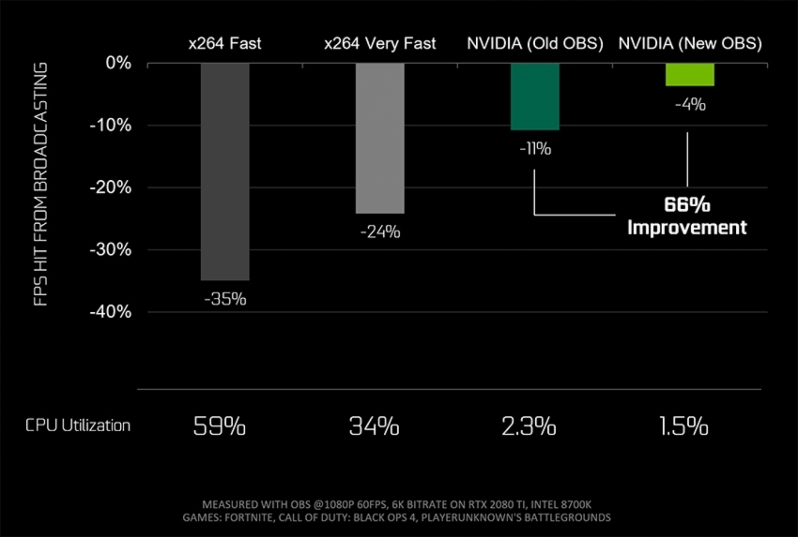 When announcing this planned update, Nvidia also noted that their latest RTX series graphics cards featured improvements to the company's NVENC encoder, changed that made the encoder 15% more efficient on Turing than Pascal. This allows Nvidia's encoder to reach quality parity with OBS' x264 Medium Encoder at a bitrate of 8,000.

Nvidia's Turing architecture, in conjunction with OBS' upcoming updates, will allow Nvidia's hardware encoder to offer similar quality to CPU-based x264 Medium encodes while offers end users increased performance, which is great news for streamers on Nvidia hardware. Changes to Nvidia's hardware encoder with Turing allows the new architecture to deliver increased image quality over Pascal when both are streaming at the same bitrate. 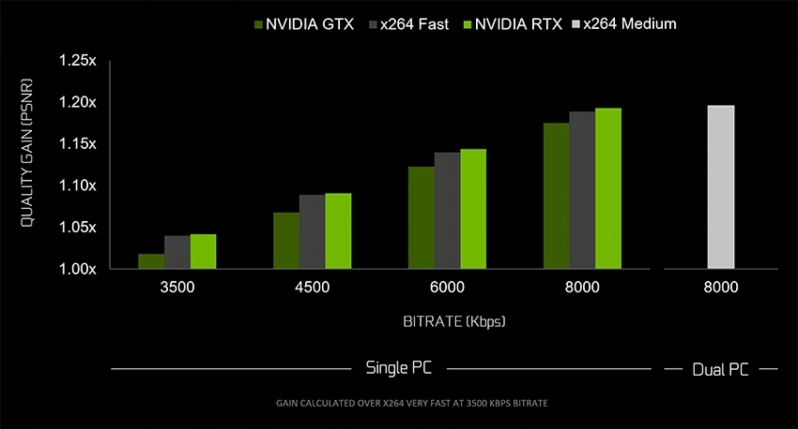 OBS is currently scheduled to release these NVENC performance updates at the end of this month, with Nvidia GTX 700-series (and newer graphics cards with NVENC) benefitting from the update. StreamLabs plans to implement these changes into their client after the next OBS release.

You can join the discussion on Nvidia's work with OBS to reduce the performance impact of NVENC game streaming on the OC3D Forums.

AlienALX
Is this so Jen can say "It just works, OBS"?

Flux
I use my 1070's NVENC when I stream with obs, it's been a great help to my PC set up. Cannot wait to see the improvements they've made.Quote

JeffDee
And the awards for the most obnoxiously impossible to understand Slides goes to: Nvidia

Their Marketing slides are absolutely impossible to make anything technical out of, "Quality Gain (PSNR)" listed in "It's just better by X" when actual PSNR is expressed in decibels, so we have no clue what the difference in dB the results are but, we sure do know "it's better".

NVENC is nice, it's really useful for people that can't afford a big CPU or a second encoding PC. I'm glad they're working on the compression and quality, but from what I'm seeing here, it's just technobabble and "it just works" type of marketing material.

Comparing 2 Images in quality without knowing the resolution/FPS/bitrates, that's helping.Quote

looz
I wonder if this just means that OBS and shadowplay have performance parity - there was some Nvidia proprietary tech involved in capturing the frames from card's buffer, alternative to which was somewhat CPU intensive. Though it was a drop in the ocean compared to CPU encoding video.Quote
Reply