Rumours of Nvidia's Turing-based GTX 1660 Ti graphics card have been circulating for several months, but now it looks like the graphics card is real, appearing at what appears to be a Chinese media event. The image below comes via the Chinese overclocker ShinChao Tou, who is also known as Uing07.

In the image below, we can clearly see the words "Geforce Turing", "New GTX Turing and "GTX 166" on the graphics card that's showcased, suggesting that the recent rumours regarding the GTX 1660 Ti are true.

Looking at the slide in the picture, we can see that the GTX 1660 Ti uses a cooler that's similar to Nvidia's RTX Founders Edition graphics cards, utilising a dual-fan cooler design on the company's own design.

Recent rumours regarding this graphics card have it listed with 1,536 CUDA cores and 6GB of GDDR6 memory over a 192-bit memory bus, giving the graphics card 256 more CUDA cores than the GTX 1060. When combined with Turing's improved SMs, which offer independent integer and floating point execution pipelines, the GTX 1660 Ti should offer a significant performance bump over today's GTX 1060 graphics cards. 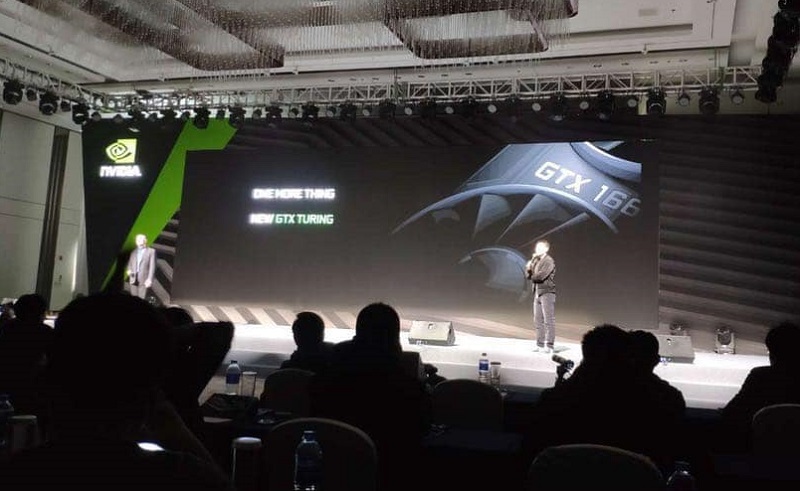 While this image doesn't appear to be faked, we recommend that our readers take this confirmation with a grain of salt until the GTX 1660 Ti is officially revealed by Nvidia.

You can join the discussion on Nvidia's Turing-based GTX 1660 Ti appearing at a Chinese media event on the OC3D Forums.

looz
If the amount of CUDA cores is accurate, I'm a bit relieved since I was anticipating 2060 performance at a lower price point. And I already bought the 2060. :PQuote
Reply