Update your drivers, or leave your system vulnerable

Nvidia has issued a new security bulletin which warns their users that their Geforce, Quadro and Tesla graphics cards could be leaving their systems vulnerable to five recently discovered security exploits.

Thankfully, these issues are patched with Nvidia's latest driver updates, which for users of Geforce gaming graphics cards if 431.60. These security holes are only exploitable on Windows-based PCs, impacting Windows 7, 8/8.1 and 10.

Users of Nvidia graphics hardware should update their systems to the company's latest drivers to ensure that their systems remain secure. Nvidia states that their latest driver updates address " issues that may lead to local code execution, denial of service, or escalation of privileges". Details of which driver to update to are available in the charts below. Note that some of Nvidia's Quadro and Tesla drivers haven't been updated yet. 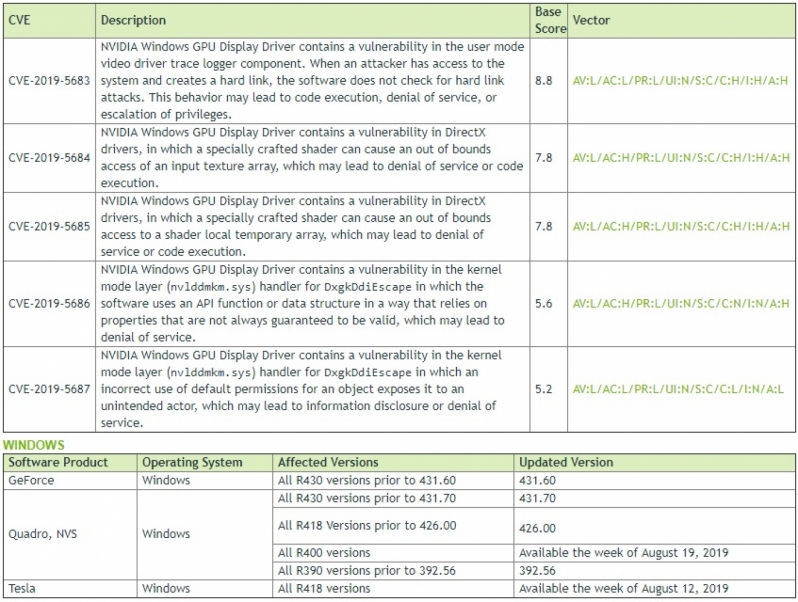 Users of Nvidia's Geforce gaming graphics hardware should update their GPU drivers to version 410.60 or newer.

You can join the discussion on Nvidia warning their users to update their drivers on the OC3D Forums.