Nvidia's Tesla A100 GPU has been pictured - The largest Ampere GPU

Nvidia's Tesla A100 GPU has been pictured - The largest Ampere GPU

Nvidia's Ampere-powered Tesla A100 chip has been pictured, sporting a whopping six HBM2E chips and a die size that appears to be larger than anything that the company has ever produced.

Below is a Tesla A100 SMX module, a form factor that's unique to Nvidia's Data Center graphics lineup. Nvidia's GA100 silicon is due to replace Volta, finally replacing the company's GV100 silicon and their Tesla V100 series of graphics cards.

Videocardz leaked the image below, and estimate the die size of Nvidia's Tesla A100 to be 820-840 mm². Sadly, full specifications for this chip remain unknown.

With six stacks of HBM2 (likely HBM2E) memory, Nvidia will be offering its customers a significant boost in bandwidth and memory capacity over its existing Volta-powered offerings. beyond that, process tech enhancements will allow Nvidia to add more transistors to its GA100 chip for any given size/area, making this chip a lot more powerful than Volta. With Nvidia offering large die sizes and increased transistor density, a large performance boost over Volta is practically guaranteed.

Nvidia's CEO, Jensen Huang is due to reveal the company's Tesla A100 chip at the company's GTC 2020 keynote later today. This event will be streamed at 2 PM BST on YouTube. 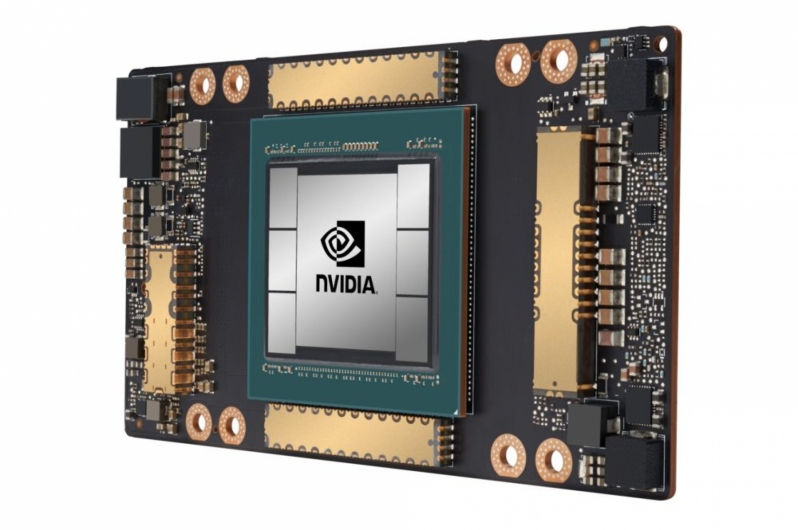 You can join the discussion on Nvidia's Tesla A100 silicon on the OC3D Forums.