That's right, Nvidia's RTX 3090 now costs under £1,000 in the UK, offering users this graphics card's huge 24GB frame buffer at a historically low price. While Nvidia's newer RTX 3090 Ti is their current performance king, it also comes with a pricing premium and a huge power draw increase. These two factors make Nvidia's RTX 3090 a better value option, assuming you can attach the word "value" anything worth almost £1,000.

Today's RTX 3090 pricing showcases the difficult position that Nvidia has placed themselves in. The cryptocurrency mining bust has left Nvidia and their partners with literal warehouses of graphics cards to sell, and consumers are no longer willing to pay inflated prices for them. The laws of supply and demand are no longer working in Nvidia's favour, and that means that demand needs to be stimulated by lower prices. That's why Nvidia's RTX 3090 can now be purchased for under £1,000. 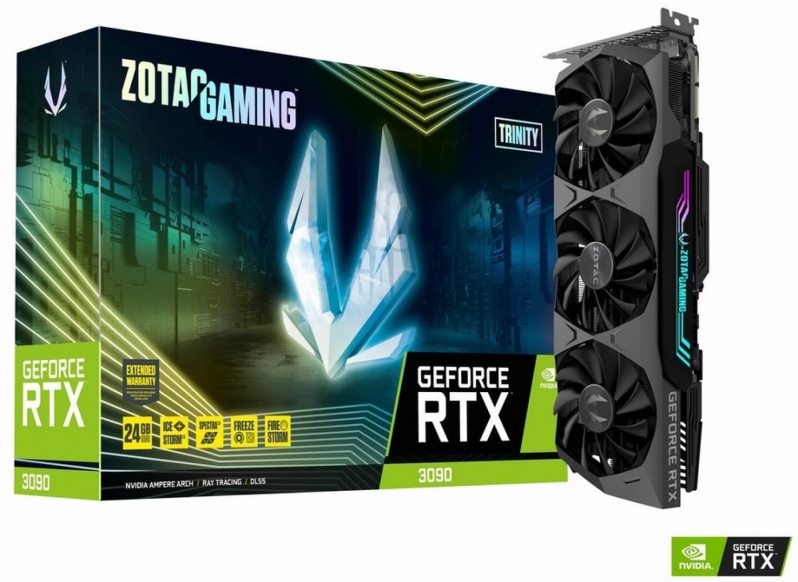 At this time, it is unknown if further price decreases are on the horizon. We do not know how well Nvidia's graphics cards are selling at their current prices, or if these sales are high enough for Nvidia to sell out their RTX 30 series graphics cards within a reasonable timeframe. In time, it is possible new Nvidia RTX 3090 GPUs will be available at an even lower price from retailers. That said, we do not know what the future holds.

You can join the discussion on Nvidia's RTX 3090 pricing dropping below £1,000 on the OC3D Forums.

AngryGoldfish
Jay still seems to think everyone should have bought last month when this same card was £200 more expensive.Quote

dazbobaby
I expect another drop of around £200 to finally get rid.
Then of course the 40XX is due soon, and I think they'll be MUCH cheaper than current prices.


Nvidia have screwed everyone this series, and that includes themselves.


Karma can give you a bloody good slap now and again.Quote

AlienALX
Quote:
Jay is besties with EVGA. He continually pops up there to pick up free stuff.

I can absolutely guarantee that his shill videos about buying RIGHT NOW were asked for by EVGA. In fact, in one video he made he went to their website and showed you just how cheap the cards were.

Remember, if something smells like fish? chances are it's fish.


Quote:
LMAO you for real dude? think about what you are saying.

When the 30 series launched they seemed to fly in the face of the 20 series in regards to pricing. Why do you think that was? because Nvidia were being apologetic for the horrendous 20 series prices? LOL no chance dude.

The 20 series were on TSMC. Compared to the 10 series they were enormous dies, and TSMC had shoved their prices up. So they went to Samsung, and got a cheap AF deal. That was why the RRP, and pathetic amount of cards Nvidia have sold at RRP were "cheap". It has been all but impossible to buy a hunk of plastic crap basic card for the "RRP". And again, that was cheap dies.

Nvidia, at some point, decided they wanted to make 60% on every "kit" sold. IE, the die and the VRAM which they source and sell to board partners as a kit, most probably making 60% on the VRAM too.

They will not change that, because they are a share held corporation and their shareholders would not allow them to start cutting prices like that.

Now? they are going back to TSMC with their tail between their legs. Do you think TSMC will cut them a break? a deal? LOL if anything? they will be paying more now than TSMC wanted before. Meaning if you thought 20 series prices were bad? you just wait and see what these will cost.

They are not going to be cheap. At all. That is why they want rid of all of these 30 series cards ASAP so they can do what they do before every launch and starve the market. They always discontinue the old cards now before the new ones launch, leaving a hole in the market. That way they can charge what they like and you don't have any other option. Especially if you "waited" or sold your old card and now have some old single slot cruster adorning your PCIE slot.

And then of course there's the new PSU you will need, maybe a new case and most certainly more fans etc.Quote

dazbobaby
Quote:
I honestly think they're going to be cheap for a few factors.
1. If the energy prices really do rise as threatened, then who can afford a GPU let alone power it. This is UK centric, but Germany is having problems getting off Russian gas.

2. There's already a glut of GPU's on ebay that people are asking too much for, especially the old miners. Inflating prices right now could be a serious mistake as not many people would buy a more expensive GPU while the 30XX series is still perfectly serviceable. There are always some who don't care about the cost and will do whatever they can for more FPS... but they say "a fool and his money are soon parted".

3. We're heading into another depression thanks to inflation and taxation to prevent it getting worse. Give it a few more months... you'll feel it bite. The market for new GPU's will shrink and maybe colossally depending on how bad it gets.


4. Like you said, on top of the GPU cost, there's a new PSU to consider if you don't have one that's strong enough or has the cables for it. So add another £100+

The UK also generates as much as 60% of our electricity from natural gas, this is running out, eventually one day it'll be gone, and if steps aren't taken, the UK will be in a lot of pain.

While that doesn't matter right now, the gas will always diminish and reduce and go up in price. So will electricity.


The UK's finances aren't getting better any time soon, by Christmas we'll all know how it's going to go. That's a small window for Nvidia to sell GPU's at already inflated prices.


I agree, since 20XX prices have got seriously out of hand, but the upward trend has to stop or people will switch to AMD or Intel (if ever).


I get quite emotional about this sort of thing, in my mind I want nvidia to seriously hurt for what they did to gamers, so I could be VERY wrong, but this is just my opinion.Quote

AlienALX
Ask yourself this.

Does Nvidia give a flying f**k about any of your points above?

They will be expensive.Quote
Reply