Only 200 of these graphics cards have been manufactured

Nvidia's RTX 2080 Ti Cyberpunk 2077 Edition graphics card is one of the most sought after PC components available today. Only 200 of these graphics cards exist, and in February, Nvidia announced that 77 of these GPUs would be given away to Geforce fans.

Now, winners of Nvidia's giveaways have started to receive their limited edition graphics card, and some savvy winners have decided to sell their ultra-exclusive graphics cards for incredibly high prices.

So how much is Nvidia's RTX 2080 Ti Cyberpunk 2077 Edition worth? Well, according to eBay it's worth £5,000. That's how much this ultra-exclusive graphics card sold for earlier this week. Other graphics cards are currently for sale on eBay with £2,200+ prices, which is more than enough to purchase more than two standard RTX 2080 Ti graphics cards.

Nvidia's custom RTX 2080 Ti graphics cards will feature a customised aluminium shroud with Cyberpunk 2077's signature yellow styling and the same components as Nvidia's RTX 2080 Ti Founders Edition. This graphics card is perfect for Cyberpunk 2077 collectors or those who want something a little more exclusive than normal. 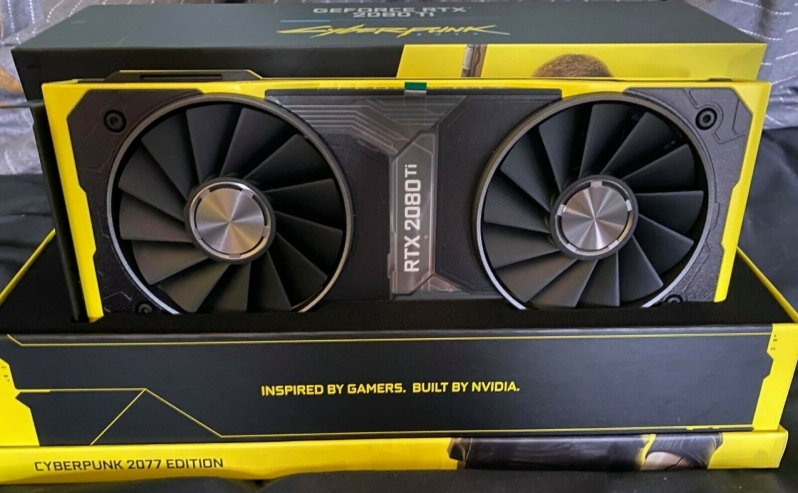 You can join the discussion on Nvidia's RTX 2080 Ti Cyberpunk 2077 Edition graphics card selling for £5,000 on the OC3D Forums.

AlienALX
One born every minute.Quote

trawetSluaP
Honestly... Only one word I use to describe scalpers, begins with c, and rhymes with hunt.

Shame to the people paying that much but considering they were competition prizes I think Nvidia should have put in place a term where you cannot sell the GPU, meaning only people who would want one of those would able to enter.Quote

AlienALX
They probably did, but since when has any one cared about that? I've bought most of my ES from Ebay lol.

Most of the people who win competitions are serial entrants any way, and sell their prizes.Quote

WYP
Quote:
Well, if you can afford it and really want it... That said, I'd never spend that much money on a graphics card, even if it is limited edition.


Quote:
Yeah, it is a shame that so many of these cards went to people who don't appreciate them. That said, £5,000 is a lot of money.

I'm not sure how enforceable such a term is.Quote

AlienALX
Well it's mostly been proven that limited edition hardware is never worth anything. Kinda like Fallout collectables.Quote
Reply