It's hard not to be impressed by Nvidia's G-Sync HDR displays, with both ASUS' PG27UQ and Acer predator X27 offering the killer combination that is 4K resolutions, tear-free high-framerate gaming and full support for DisplayHDR 1000 with a QLED panel and a 384-zone Full-Array Local-Dimming panel. PC gaming displays don't get better than this, at least right now.

The hardware boffins over at PCPER have gotten their hands on ASUS' PG27UQ, one of Nvidia's first G-Sync HDR monitors. Instead of merely testing the monitor, PCPER also tore the hardware apart to see what secrets are lying under the hood, though what follows is something that is likely to take you off-guard.

Nvidia's new G-Sync HDR module uses an Intel-made FPGA (Field-programmable gate array), a highly programmable processor that can be coded for a wide range of applications. The FPGA used in Nvidia's G-Sync HDR module is an Intel Altera Arria 10 GX 480, which means that you could stick and "Intel Inside" sticker on this monitor and technically be correct.

The downside of using a programmable FPGA instead of a dedicated ASIC is it's expense, as the programmability of the module comes at a high silicon cost, adding to the retail price of FPGA-based products. Looking at online sellers of Intel's Altera Arria 10 GX 480, it is clear that the FPGA adds a significant cost to G-Sync HDR displays, with PCPER estimating that it adds $500 to the monitor's bill of materials.

The module was also found to use 3GB of Micron DDR4 memory at 2400MHz, which is a major upgrade over Nvidia's original G-Sync module, which contained 768MB of slower DRAM. 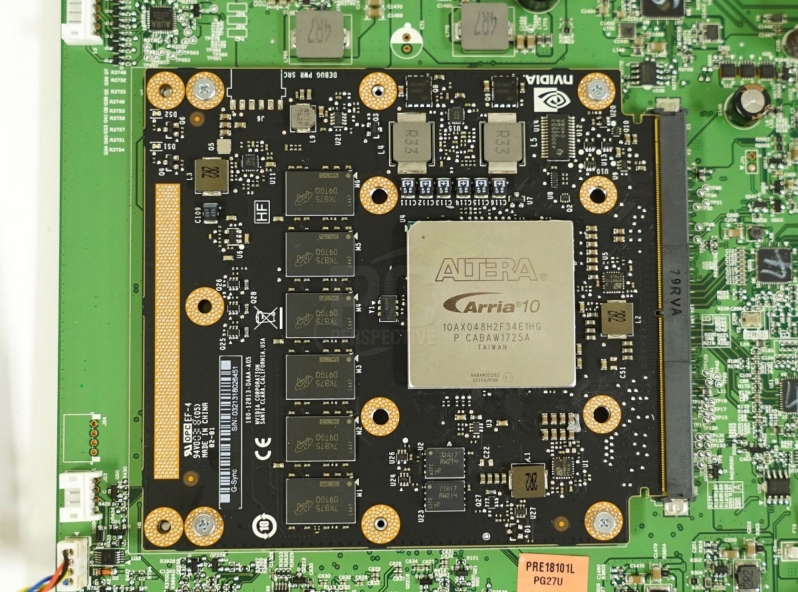 If PCPER's valuation of $500 is correct for Nvidia's Intel Atera-based G-Sync HDR module, it means that it will be possible for manufacturers to release similar displays without G-Sync at a lower cost. The $2000 price tag of early G-Sync HDR monitors isn't all due to the cost of high-resolution, high framerate HDR technology.

You can join the discussion on Nvidia's G-Sync HDR monitors shipping with Intel Inside on the OC3D Forums.

superchad
probably because it leads to a shorter time to market and lower development costs since they don't have to design special circuitry. even though manufacturing costs may be higher.Quote

ET3D
Looking forward to a similar FreeSync monitor bundled with a Vega 64 for that price. Got to use the $500 for something.Quote