Nvidia's A100 Tensor Core GPU has a lot of untapped potential

More than 15% of this chip has been locked down

Nvidia's A100 Tensor Core GPU has a lot of untapped potential

What we're saying is that Nvidia has left its GA100 GPU core with a lot of unused silicon, so much so that almost 20% of this graphics card's performance has been locked away. We will explain later why Nvidia may have done this, but it highlights how much potential GA100 still has to offer its potential userbase.

Nvidia could release a fully unlocked A100 chip at a later date, or a variant which leaves less of this GPU's silicon disabled. Given the size of this chip, it is likely that Nvidia has disabled some to GA100's SMs and memory controllers to help increase silicon yields. That said, disabling over 1,280 CUDA cores is a big cut to make for the sake of yields.

If GA100 was fully unlocked, Nvidia would be able to offer its customer 18.5% more CUDA cores and a 20% increase in memory bandwidth/capacity. Assuming clock speeds remain the same, a fully unlocked GA100 chip could deliver an 18.5-20% performance boost depending on the workload.

At this time it is unknown why Nvidia has locked down so much of its GM100 chips with its A100 Tensor Core GPU. Silicon yields are a likely culprit for the A100's unused silicon. Perhaps we can expect Nvidia to release a further unlocked A100 Super graphics card next year. 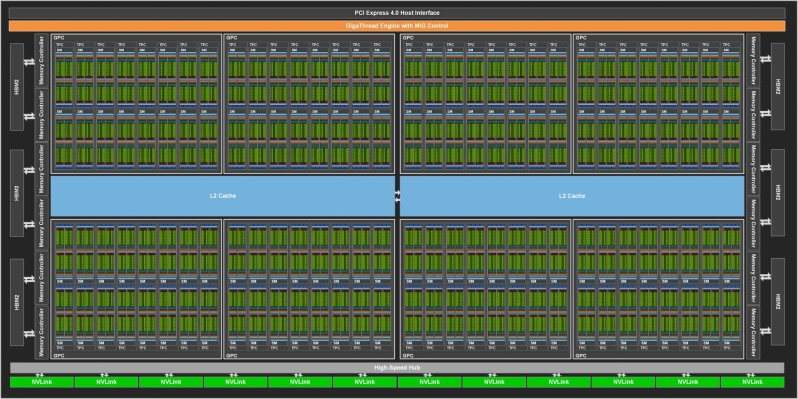 You can join the discussion on Nvidia's A100 Tensor Core GPU on the OC3D Forum.

NeverBackDown
In about 6 months I am sure they will release a nearly fully unlocked SKU.Quote

AngryGoldfish
That machine that Jensen was in his kitchen with, starts at $200k, I think.Quote

Breit
Well, the A100 is already at 400W. I suppose at some point this becomes un-coolable as the heat transfer into the cooler is indeed a very real problem. Especially with the given surface area that this chip has due to the high density 7nm process. Sure they can come up with another CEO edition for Ampere this time with highly binned dies and lower voltages, but I doubt a fully enabled chip will be regularly available.

Furthermore, I suspect that they are VERY close to the reticle limit of what TSMC can do with their 7nm process. So yield must be abysmally low for fully functional dies. I'd guess they had this in mind when they designed the A100 die and never intended to release a fully enabled chip and I must admit this is a valid strategy if you want to keep a monolithic die and not go the chiplet-route to keep yields acceptably high.Quote

looz
Quote:
I don't think thermals will be the issue - it's massive like you said. Having 200W on your thumbnail is an issue like we've seen with 9900K, especially with a heatspreader design, but 400W on a massive directly cooled die? Not much of a problem - and water cooled high density servers are a tested technology, and Nvidia decidedly didn't take that route. In addition noise is not a factor in server environment and the air cooling is highly optimized, be it hot aisle for exhaust and whatnot.

If you're wondering how A100 translates to consumers - don't, this is prohibitively expensive to manufacture. They're strictly targeting high density computing.

But yields for a fully-fledged massive die in 7nm must be horrid and such product wouldn't be sensible for any data center to buy - their rack unit is already the densest thing out there by a significant margin.Quote
Reply