Many games are achieving a less than 2x performance boost

Don't expect Nvidia's RTX 4090 to have a 2-4x performance boost in games without heavy ray tracing and DLSS 3.0

When Nvidia revealed their RTX 4090 GPU, they used the slide below, claiming 2-4x performance gains over their RTX 3090 Ti graphics card. This was a lofty claim, setting expectations high for the company's RTX 40 series. In reality, Nvidia's RTX 40 series will offer gamers lesser performance gains in most modern games, as Nvidia's data heavily relies on games that make heavy use of ray tracing and games that feature DLSS 3.0.

With DLSS 3.0, Nvidia can utilise a technique called DLSS Frame Generation (more details here), which can effectively be used to double the framerate of content by using AI generated frames. 60 FPS games can be transformed into 120 FPS games, effectively giving Nvidia's RTX 4090 a 2x performance boost. For games without DLSS 3.0, this 2x performance boost is not possible. 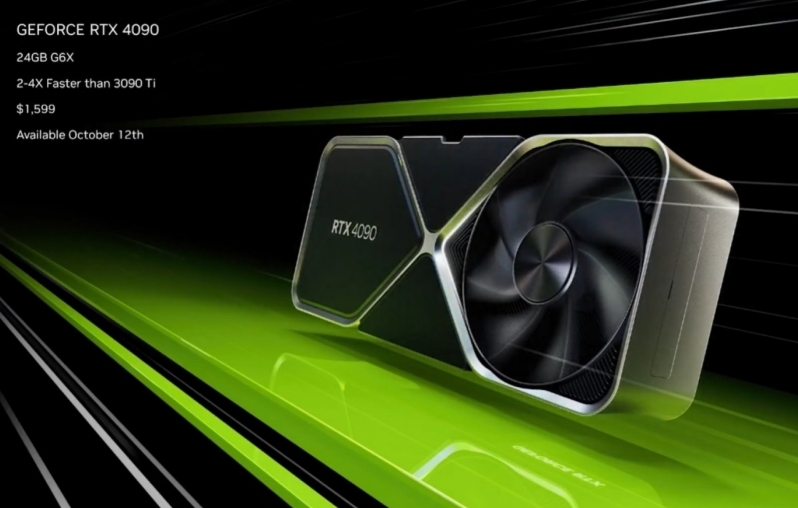 In the graph below, Nvidia has separated its performance numbers into two sections "Today's Games" and "Next-Generation" games. Nvidia's "Next-Generation" games make use of heavy raytracing workloads or full-on path tracing and DLSS 3.0, fully utilising the architectural benefits of Nvidia's Ada graphics architecture. In these games, Nvidia's RTX 4090 can deliver 2-4.3x performance gains over their RTX 3090 Ti, but the same is not true for "Today's Games".

When looking at Nvidia's "Today's Games" section, it is worth noting that both Microsoft Flight Simulator and Warhammer 40,000 Darktide are confirmed DLSS 3.0 titles (read more here), which means that their performance data is likely influenced by DLSS 3.0. We know that Microsoft Flight Simulator's data is impacted by DLSS 3.0, as Nvidia has showcased the game running with DLSS 3.0, though we cannot be certain about Nvidia's Darktide data. 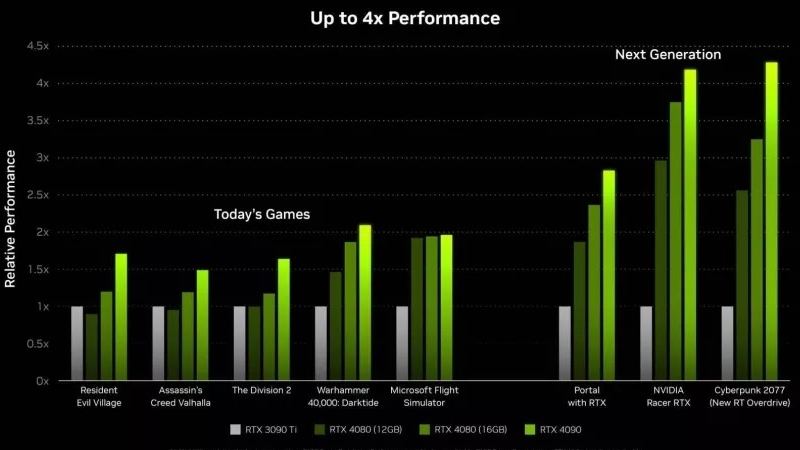 You can join the discussion on Nvidia's RTX 4090 performance numbers on the OC3D Forums.

Warchild
And thanks to this overpriced false claim, i picked up a 3090ti for half price.

Just have to hope the stock is legit and I do get it now.Quote

KingNosser
After last time around did anyone really expect that the claims would hold up ?

upto claim means a lot less than most so 2x is most likely an upto which means maybe most be 50% and 4x with dxr and dlss3 means similar.

be intresting to see real numbers soon i'm guessing a lot different to how they state hardware unboxed will most likely do a deep dive and other reviewers will give a general overview.

This is utter nonsense from Nvidia, performance is and was always work over time. Twice the performance would mean you did twice the work in the same time. Changing the work is NOT INCREASING THE PERFORMANCE in fact you could argue its 0 performance because the actual work was never done properly. That’s why all the claims that DLSS/FSR/XeSS increase performance are always and will always be a lie. Things like A-sync Compute or Shader Rearrangement (like Nvidia does now) are REAL Performance improvements. If I would have invented fake images for my studies then I would have been thrown out of my University but for Nvidia Fake Information is somehow performance, sorry but this garbage has no place in a scientific workspace. That’s why you should never consider anything with such "cheating software" to be a real Benchmark, its fraudulent to any costumer and shareholder. And if I would have been a shareholder I would have sued Nvidia after this outrageous presentation. If they really advertise with those fake Frames here in Germany then I may be forced to write to the local consumer protection agency.Quote

Warchild
They dumbed down the ultimate result for the masses now, so that everything is all about the FPS. It tricks people into thinking that if you see 20fps before and 60fps after then it doesnt matter that DLSS is the reason, they think the card has performed much more on a hardware level.

Too many foolish people in the world not to see the real numbers sadly.Quote

AlienALX
Quote:
Nice one dude ! pics when it arrives !