All of the graphics cards in the RTX SUPER series will offer 128 to 256 more CUDA cores than their non-super variants, with models such as the RTX 2080 Super and the RTX 2060 Super featuring higher levels of memory bandwidth, which are possible by using faster GDDR6 memory and a wider memory bus respectively. 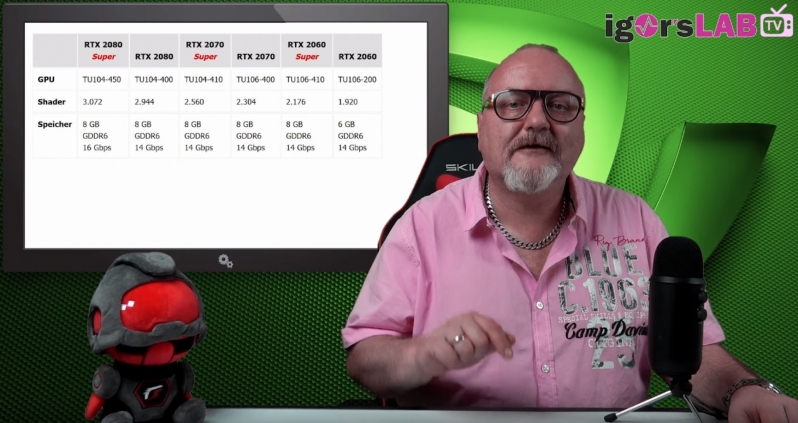 You can join the discussion on Nvidia's rumoured RTX 20 SUPER series on the OC3D Forums.

tgrech
That RTX2060 Super is essentially just an RTX2070 at this point(Now they've removed the artificially gimped memory bus), are these SKUs going to replace the old ones in the same price bracket or are they just here to fill the gaps between NVidia's pricing tiers atm?Quote

demonking
What a great idea! flood the market with more SKU's and make more massively overpriced cards, that worked so well for you last year.
Looking at the way both GPU companies are currently operating I can see clear growth in one and clear decline in the other and this is not going to change whilst Nvidia continue to be both Mcdonalds and SelfridgesQuote

Daiyus
I still can't believe that two years after buying my RX Vega 56, there's still nothing for me to upgrade to with the same amount of cash. I spent £380 two years ago, and there's nothing in Nvidia's line-up that offers better performance at that price.

Don't get me wrong, I'm not holding out hope on AMD's Navi either, but with Nvidia pumping more and more SKU's out constantly you can't help but hope the price/performance ratio might improve at some point.

Maybe the best thing I could buy to improve my performance at this point would be a waterblock?Quote

AngryGoldfish
I know it's early stages and it could be said it's just a rumour, but I'm amazed these are coming out. Last year Nvidia released the most obnoxious architecture and line of cards ever, with never before seen prices and features; and after no more than a year are replacing them with 'SUPER' variants. It's like Apple releasing a limited edition computer stand for $1500 with a tilt feature. Or like Samsung releasing a Galaxy S10 Plus+ with a headphone jack. It's flagship, absurdly high-end products at the top of the stack... that were never actually at the top of the stack. They had 'super' prices, 'super' features, 'super' marketing, but they were never 'THE' super. Maybe I'm seeing too much into things (I probably am), but I feel genuinely upset and disappointed with the PC enthusiast market, at least in the GPU realm where the most fun is...or was.Quote

NeverBackDown
It's funny it's leaked after Navi.. trying to get more attention to Nvidia. No surprise. This isn't a leak, it's forcing the game media to report on Nvidia and give them attention. It was by design. Media is forced to write about it for clicks. I hate these so called "leaks and rumors"Quote
Reply