Nvidia is investigating this leak, a sign that it is legitimate

As more time passes, Nvidia's RTX 3080 heatsink leak is looking all the more legitimate. More images of the heatsink have appeared online, and sources over at Igor's Lab have claimed that Nvidia has launched an internal investigation into the leaks. The same source has also claimed that these coolers cost around $150 to produce.

If these leaks were illegitimate, Nvidia would have no reason to investigate them. If Nvidia is indeed investigating the leak, that alone would prove its legitimacy. This could be what Nvidia has planned for its RTX 3080 graphics card, and the fact that coolers are being manufactured is a good sign that Nvidia has a hardware launch planned within the next few months.

The image below comes via LeeJiangLee on Reddit, who has shown three of Nvidia's bare heatsinks without any fans or surrounding materials. This is the core of Nvidia's latest heatsink design, and it makes a lot of sense from a design perspective. 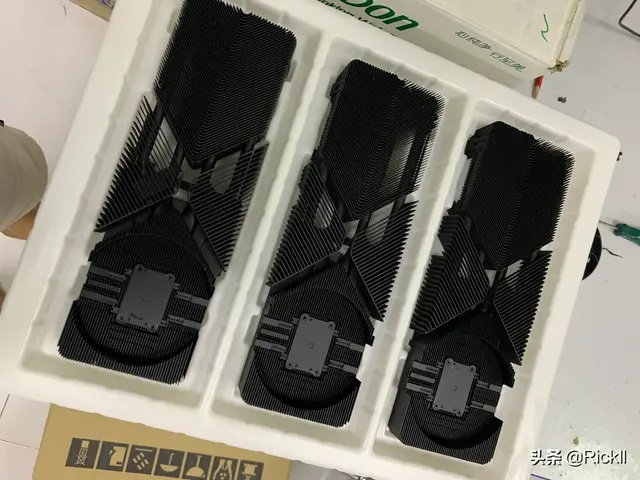 This heatsink design is unlike anything that we have ever seen before, leading many to declare that the design must be a fake. While the design is a little unorthodox, it is hard to know exactly how this design works in practice. We must admit that the design is definitely striking enough to be worthy of Nvidia's Founders Edition name, but does it have the cooling capabilities that high-end PC users demand?

Unlike Nvidia's RTX 20 Founders Edition models, Nvidia's new RTX 3080 design appears to feature heatpipes throughout its assembly. This move is a significant departure from Nvidia's older designs, which typically use vapour chambers for their reference heatsinks.

You can join the discussion on Nvidia uncovered RTX 3080 heatsink designs on the OC3D Forums.

Greenback
I don't know if I'm looking at this wrong, but if both fans are intake, isn't the back fan going to blow warm air out which the case fans will blow towards the back of the case and thus into the front fanQuote

AlienALX
That is a 3d print. That doesn't mean I am saying it is fake, it may just be another piece of the prototyping puzzle.Quote

Warchild
If thats a 3D print then its resin. No way thats FDM. The cooling plate is too smooth, and those fins with no stringing or irregularities? Unless its a high end metal print.

im skeptical because even if it was resin, washing this design would be a nightmare.

I honestly think it was staged. Leak the images, create hype, get opinons on the cooler (which the populace mostly hate) and then fine tune or change where needed.Quote

Look at the bigger image. Look closely, especially at the back of the GPU cooling plate etc.

It's a total mess.

And yeah, it probably is a resin. I wouldn't imagine Nvidia printing with a £200 3d printer lol. I am not saying it is fake, but probably another prototype design.Quote

Ive zoomed right in and dont see anything wrong. It looks cleaner than many CPU cooling fins ive looked at. The perpendicular lines just look different because of the camera angle.Quote
Reply