Who needs a Native HDR Display Pipeline? Nvidia does!

Nvidia's Turing architecture is more than just Pascal with RT Cores, and Tensor cores bolted to the edges of SMs, delivering several architectural improvements that are designed to provide increased performance over the company's Pascal architecture.

Perhaps one of the most under-reported improvements found in Nvidia's Turing architecture is its use of a "Native HDR Display Pipeline", which is designed to increase Turing's performance when running HDR content. Simply put, Pascal was not designed with HDR in mind, delivering sub-par performance levels when running games with HDR enabled, especially when used in conjunction with G-Sync.

Hardware Unboxed has dived a little deeper into Turing's HDR performance, playing several popular games in SDR mode, with HDR enabled and with both G-Sync and HDR enabled. Sadly, we do not have a G-Sync HDR display in-house to verify these results at this time.

With Nvidia's RTX 2080 Ti, it was discovered that the performance impact of enabling HDR and G-Sync HDR was minimal, so low in fact that it would be impossible to notice in-game. Moving back to Nvidia's Pascal-based Titan X (Pascal), Hardware Unboxed found that enabling HDR caused a notable drop to both average and minimum framerates. In Star Wars Battlefront II, enabling HDR and G-Sync resulted in a 12% decrease in average framerate, with larger drops being possible in other games. Please watch Hardware Unboxed's video to see benchmark results for other games with G-Sync and HDR enabled. 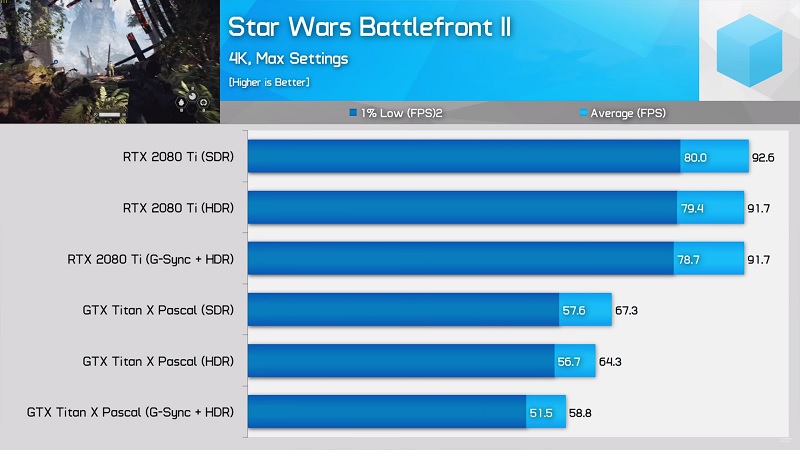 (This image is from a Hardware Unboxed Video)

These results show that Nvidia's investment in a Native HDR Display Pipeline within Turing has paid off, resulting in an HDR and G-Sync HDR gaming experience that doesn't make compromises when it comes to game performance.

You can join the discussion on Turing's G-Sync HDR performance on the OC3D Forums.

tgrech
It's worth noting that most of the performance impact caused by enabling HDR on NVidia's cards was never seen on AMDs once games were properly supported in drivers; Likely due to FreeSync 2 support requiring a hardware HDR pipeline already. In many ways, NVidia has had to play catch-up with GSync with HDR, with the launch of the technology and displays having been delayed substantially from its original timeline, and the features essentially just bringing it inline with the by then long discussed FreeSync 2.

Recent reports point to the new RTX cards having hardware FreeSync support(Which is logical given it's an (optional) part of every modern display standard), but has it arbitrarily disabled(Requiring an AMD card/APU in the system alongside to verify its support atm, but it's likely someone will find a more elegant workaround if NVidia keep it locked off in favour of GSync requirements.)Quote

Warchild
Quote:
It has been unlocked already. Just a tricky routine to get it working.Quote
Reply